“In Priorat, the roads twist and turn through the hills and leave the sun behind. You can see it and feel it. Priorat is a world apart”

This is how Sara Perez, the woman behind Mas Martinet, describes this rich wine region in Spain, where she and her father, Jose Luis Perez, play an important role as part of the pioneers of Priorat.

In July, I was assigned by Wine Spectator Magazine to shoot the lead story of October issue about Priorat; one of the greatest wine regions in Catalan, Spain. I got a very detailed shooting list with names and addresses of the people I was about to meet and shoot. These were the pioneers of Priorat; the leading figures of the wine industry in that region. It was an intense assignment. Shooting from 7 in the morning (to capture the sunrise over the vineyard) till sometimes 9 in the evening, when the light was orange and soft. But nevertheless, it was a fun assignment, in which I have learned so much about wine and met incredible friendly people, who are proud of what they do, and obviously, proud of their wine. 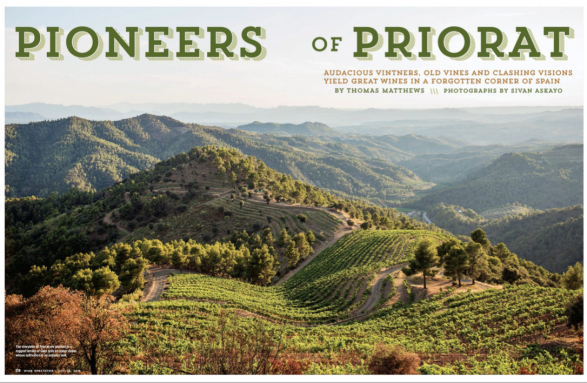 “Priorat is a small wine district in Spain’s Catalonia region. It hides behind the Montsant, a steep wall of cliffs that rise above the Mediterranean coast a hundred miles south of Barcelona. Tucked into a series of inland valleys, the vineyards climb steep hills that wind around small rivers. Villages nestle into the slopes, with stone houses lining narrow streets.

In the 1970s, a group of outsiders-idealistic, impractical, indefatigable arrived with a vision of a new Priorat. Rene Barbier, a wine merchant from Tarragona and Carles Pastrana, a Spanish journalist, were the catalysts. Having enticed a few friends and investors to join them, they began to plant new vineyards. The work took time and their first wine was made in 1989. It was a group effort, produced communally in Grattalops and bottled under several different labels” 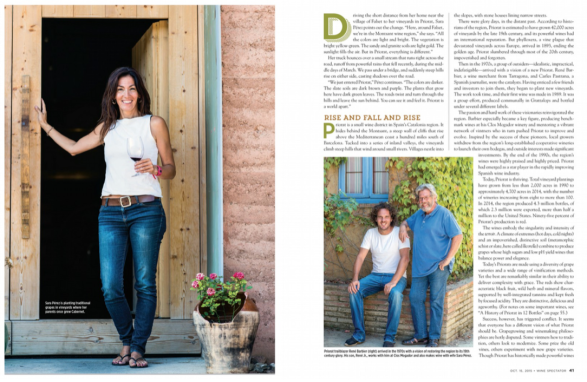 Barbier (standing, right) became a key figure, producing benchmark wines at his Clos Mogador winery and mentoring a vibrant network of vintners who in turn pushed Priorat to improve and evolve. His son, Rene Jr., (sitting, right) works with him at Clos Mogador and also makes wine with wife Sara Perez.

“Sara Perez (standing left) and her father, Jose Luis Perez, are key players in the Priorat Saga. Jose Luis was one of the pioneers in the 1980s alongside Barbier and Pastrana, helping to initiate the original revitalization of the region…she spent her childhood observing her parents’ experiments and in 1996, after studying biology in Barcelona and enology in Tarragona, she returned to Priorat. With time, she became a champion of Granacha and Carineana (types of grapes) which she considers the authentic grapes of Priorat. In 1999 she discovered a new site after following an eagle! to the top of the hill. She named it Els Escurcons and planted mostly Granacha grapes”

I was welcomed warmly to Sara’s house to have lunch with her and her husband Rene Barbier Jr. (It is a great story how they met and fell in love even though they knew each other, at least by name for years). She is not only beautiful with great smile and an endless energy, she is also a mother of four and a great cook. For me, it was a great experience to sit around the table with her family and some of her business acquaintance, opening few bottles of wine during lunch time, and talking about the industry. After lunch I went with Rene Jr. to meet his dad and to photograph them, both in the winery and the vineyards, and around late afternoon Sara picked me up with her truck and drove me to the top hill of Els Escurcons. The view (which is the opener image) could take your breath away. 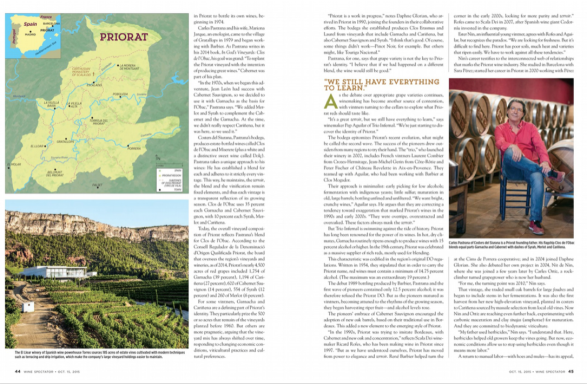 Carles Pastrana (sitting, right) and his wife, Mariona Jarque, came to the village of Gratallops in 1979 and began working with Barbier…with time Carles opened his flagship Clos de l’Obac, which blends equal parts of Granacha and Cabernet with dashes of Syrah, Merlot and Carinena. His winery, Clos de l’Obac is just next door to Barbier’s winery, Clos Mogador.

It was great to follow Carles for the shoot and hear his stories about the history and the changes of Priorat throughout the years. His vital energy and his ‘young at heart’ attitude (wearing red sneakers) was a cool breeze in one of the hottest days of July, in that area of Catalan.

The next morning I was about to shoot Torres, one of Spain’s most important and innovative wine companies, which is located near the village of El Lloar. The instructions were to shoot the modern winery quite early in the morning, when there is a great light casting the Montsant mountains. By 7 am I was already at the winery to meet Christoph Kammüller, who is in charge of the winery’s press and communication matters. Together, we were looking for great angles to shoot the facade of the modern winery and I got to see around the 185 acres of vineyards. It was too early to try a glass of wine from Torres and I continued to the next destination. 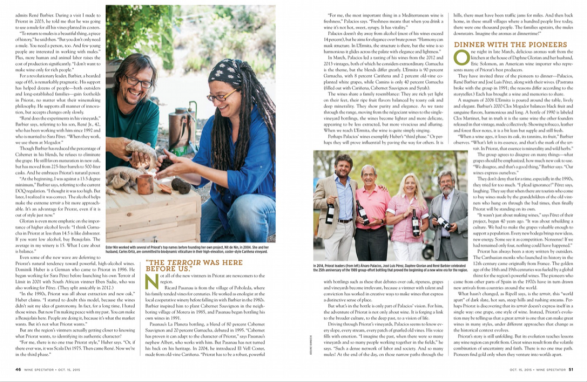 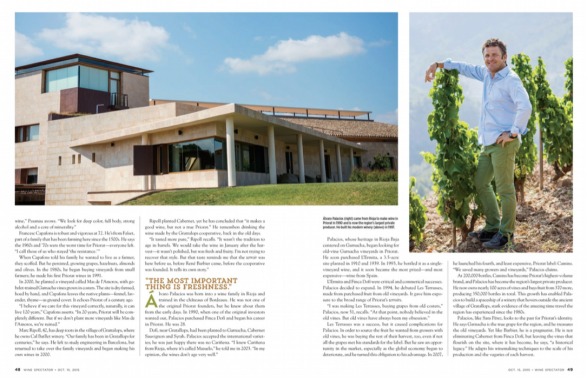 My last day of shooting, before heading back to Barcelona, was dedicated to photograph Alvaro Palacios (standing right), one of the region’s largest private wine producer.

“Palacios was born into a wine family in Rioja and trained in the chateaus of Bordeaux. He was not one of the original Priorat founders, but he knew about them from the early days. In 1990, when one of the original investors wanted out, Palacios purchased Finca Dofi and began his career in Priorat. He was 28…He soon purchased L’Ermita site and bottled it as a single-vineyard wine, which soon became the most prized and most expensive wine from Spain. In 1997 he built his modern winery overlooking Gratallops (above left) and it serves as a meeting point, winery, office space and Alvaro’s private home at the second floor. 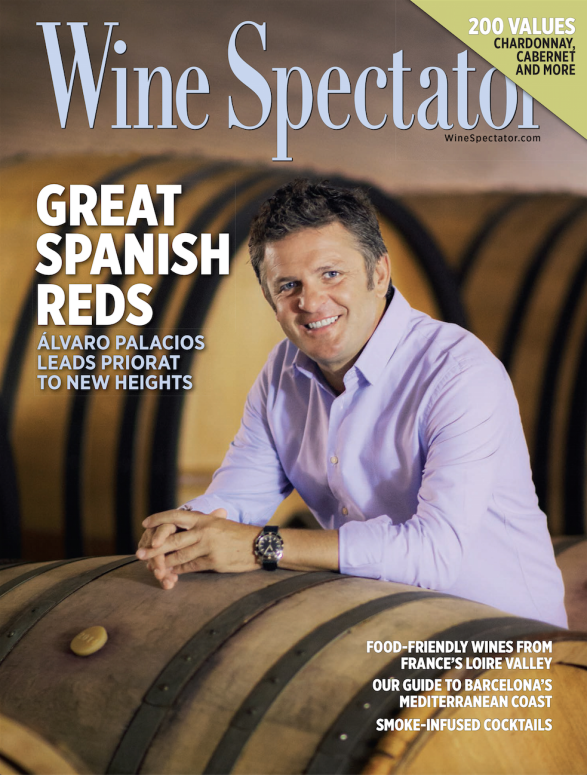 When I entered the winery, Alvaro was already ready for the shoot. I also photographed him for the cover (see above) and it seemed Alvaro was well experienced with photo shoots.