The University City of Coimbra 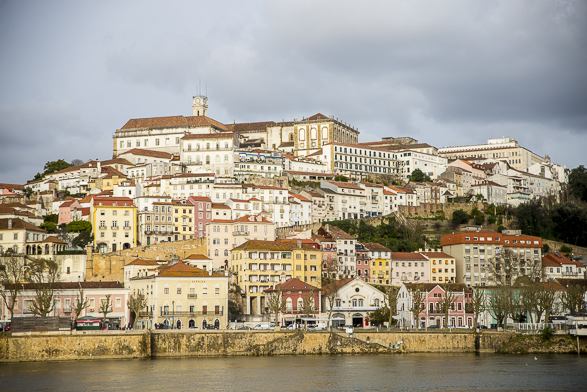 When I look at the pictures I took of Coimbra, and mostly those of Coimbra University, I feel as I still need to pinch myself to realize that the places I have visited were actually real, and not part of a Harry Potter’s movie set. It might sound like a cliche, and I might not be the only one to feel like that, but walking through the University halls and courtyards, running into students wearing their typical uniforms of black robes, patterned with colored patches and symbols, made me wonder if I was about to meet Harry and his friends in the next corner.

Truth is, when I mentioned this similarity to the University tour guide, she confirmed my thoughts and told me that J.K Rowling used to live in Porto for a few years and was inspired by her visits to Coimbra, which later were transcribe in the Hogwarts Aesthetic, including the uniform. 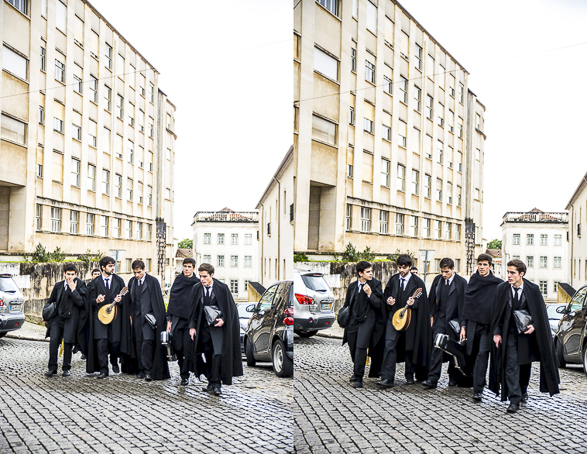 Coimbra is known as the Medieval Capital of Portugal for over a hundred years, and the University, which is considered one of the greatest in the world for the past five centuries, plays a significance role in the Portuguese history. In 2013 it was named a UNESCO World Heritage site. Some of the notable University buildings include the 12th century Cathedral of Santa Cruz, the Royal Palace of Alcacova, which housed the University since 1537, the Joanine Library with its phenomenal rich Baroque decor, the 18th century Botanical Garden and University Press, as well as the large ‘University City’ created during the 1940s.

As the University is situated on a hill overlooking the city, there are a lot of students dorms/fraternities called ‘Republicas’ down the hills, each Rebublica holds a different facade and its residents’ characters. There are currently over 24 Republics in operation, with almost all of them grouped in the Council of Republics (CR), which meets the request of any of the houses that compose it and take its decisions unanimously. A friend of mine, who used to be a member in one of the Republicas few years ago, told me there is an unwritten rule that whenever an alumni is coming to Coimbra, he can stay in his original Republica.

I visited the University at the end of February and the streets around the University were quite calm. My guide rest assured me that this time of the year was not really portraying the University atmosphere. ‘If you can’ she said, ‘come and visit us in the beginning of May, at the end of the second semester for the Queima das Fitas festival’. This festival, (The Burning of the Ribbons) which represents the end of the Academic year, is one of the biggest student parties in all Europe and it lasts eight days, a day for each of the University Faculty. It includes a parade of the University students, sport activities and the historic night-time Student Fado serenade (Serenata Monumental) which takes place in the stairs of the Cathedral in front of a crowd of thousands of students, alumni, tourists and visitors. 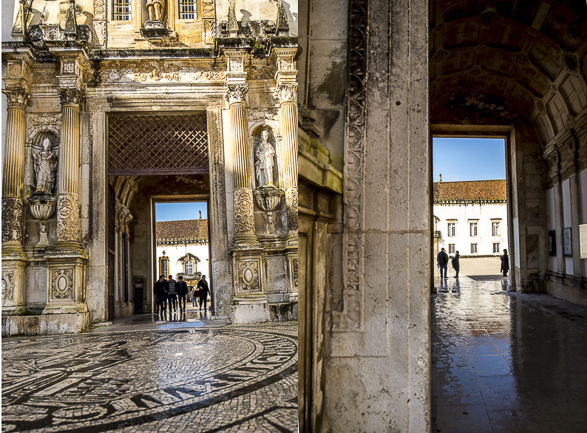 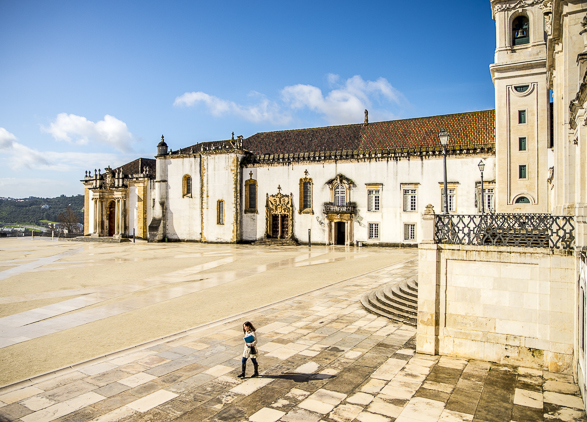 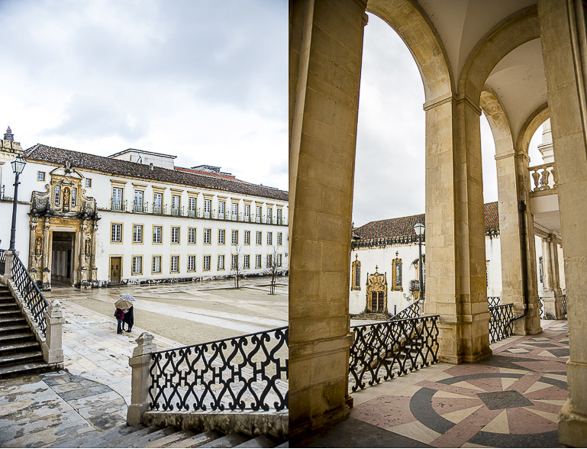 One of the highlights of my visit to Coimbra (which turned out to be one of the highlights of my trip to Portugal) was getting this special opportunity to photograph the Joanine Library from the inside. When the University tour guide opened the heavy doors that lead inside the library, I was at awe. And yes, I had to pinch myself and soak in all this beauty. While I was taking pictures of this beautiful Baroque Style Library, I had to remind myself to give my eyes a rest from the camera’s viewfinder, to really absorb this beauty.

The Library, which was built in 1717 during the reign of King John the 5th, (you can see his majestic portrait below) is located on the ruins of the former Medieval royal prison. The magnificent interior (stone floor patterned with geometric motifs, plaster ceilings decorated with allegorical trompe-l’oeil paintings and real gold leaves decorating the shelves) clearly connected with the Portuguese Empire of that period.

When I climbed the narrow steps to the second level of the library, just to have a better view and to understand its enormous amount of books, (57,000) the University tour guide leaned toward me and whispered that behind these shelves of books there is a real school of bats (!) that keep the moth away. (Harry Potter, remember?) At the same breath she mentioned that the library contains an amazing collection of 15th century Judaica, including the Abravanel family Bible and documents of the Coimbra Inquisition. 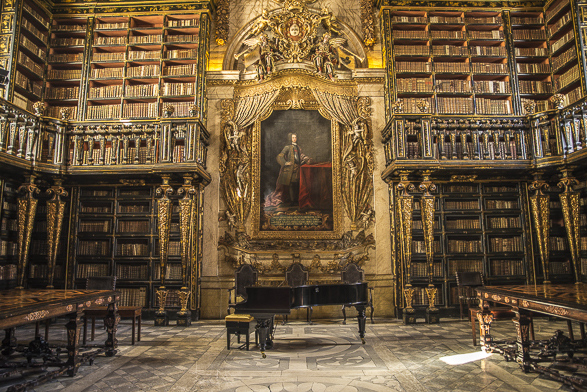 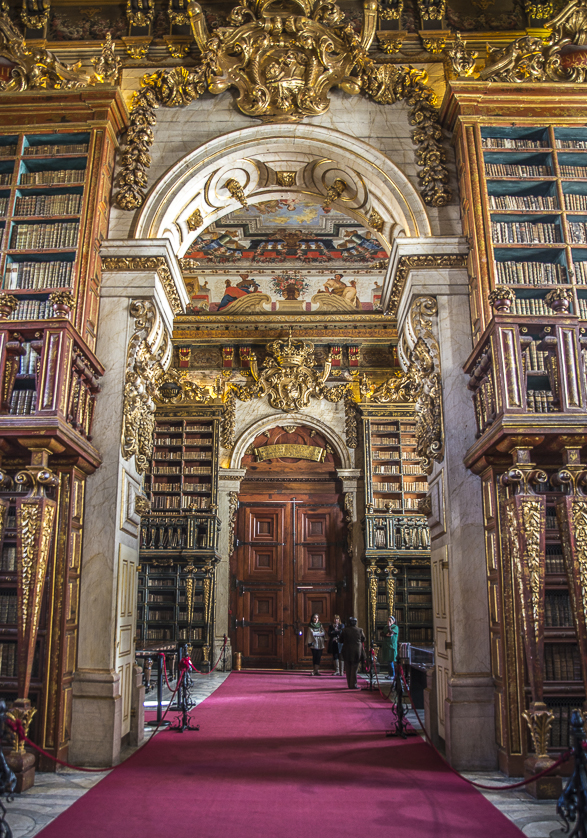 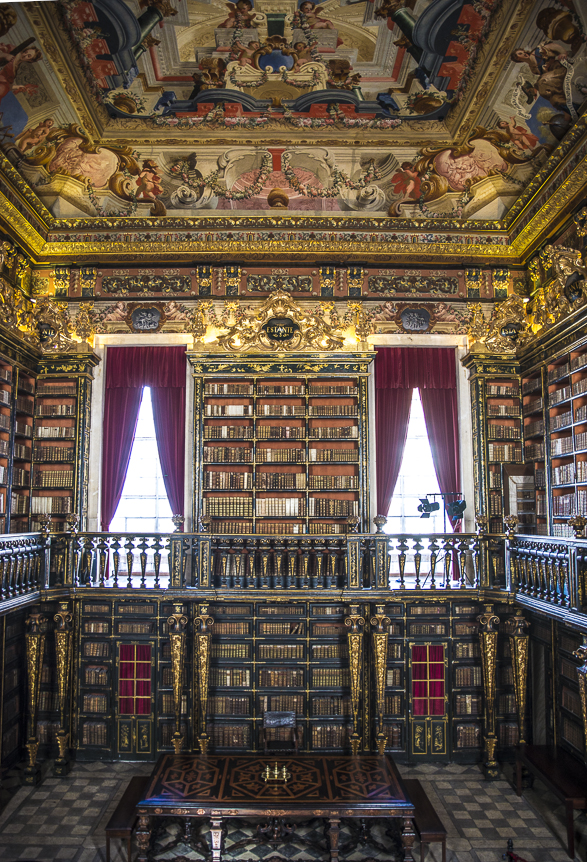 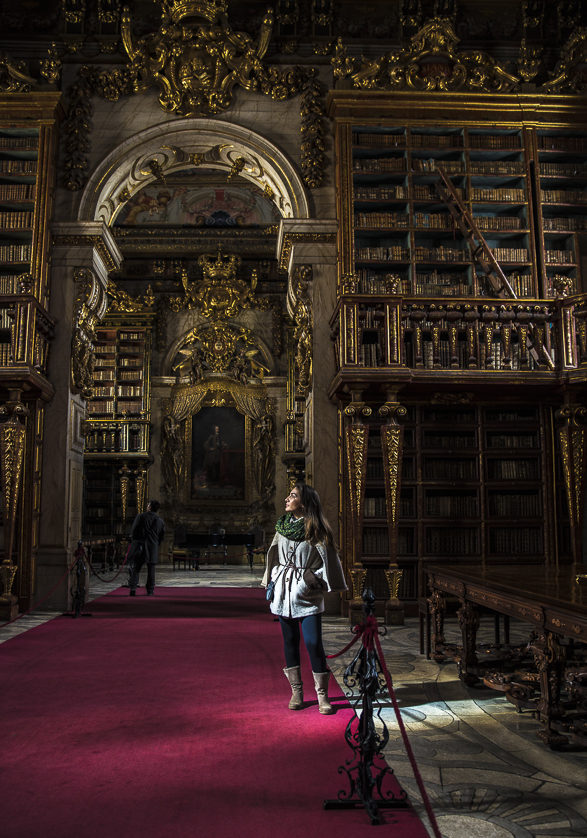 After taking a great amount of pictures of the library, we walked outside through the Via Latina, right into the Great Hall of Acts, where most of the Academic ceremonies are taking place. This is where grad students and Doctoral students are presenting and defending their thesis, where the official opening of the Academic year is taking place and where ranks of honors are given to particular people. I could only imagine how does it feel to be a student in Coimbra University, presenting his thesis under the investigating eyes of Afonso Henriques, the King of Portugal, portrayed on a large canvas on the wall.

To show respect, hierarchy and admiration, the students must sit lower than the eye level of the faculty. 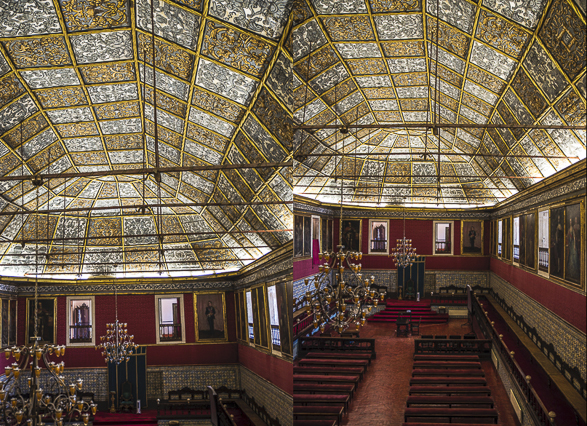 Each faculty of the University is defined by a different color. The Faculty of Medicine, for example, is characterized by the Yellow color, and the Yellow Room (walls lined with yellow silk wall paper) is where the meeting of the constituent bodies of the Faculty took place. The paintings on the walls are of 19th century Rectors of the University. The Coimbra Faculty colors are: Forest Green- represents the University, Red is for Law, Yellow for Medicine, Royal Blue for Humanities, Sky Blue and White stand for Sciences and Technology, Purple is the color of Pharmacy, Red and White is Economics, Orange represents Psychology, Brown is for Sports Science and Black and White is for the Student’s Union. These colors, by the way, will be presented as patterns or patches on the students robes, bags and notebooks. 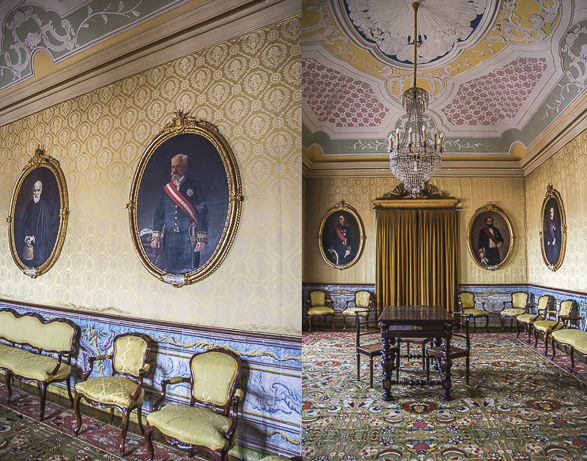 I highly recommend to take a guided tour when you visit the University of Coimbra. Whether you are a Harry Potter’s fan or not, the stories, the facts, the additional information you get to hear, are somewhat better than the movie. 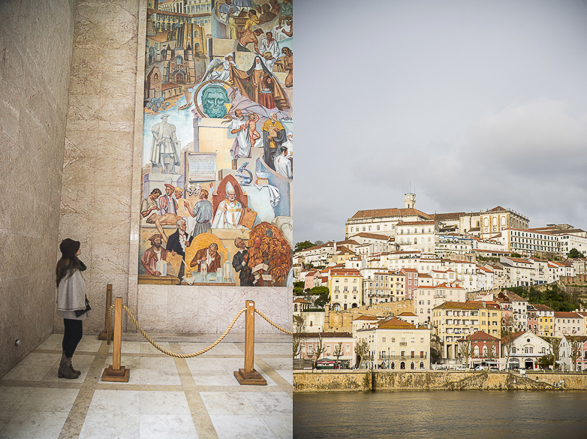 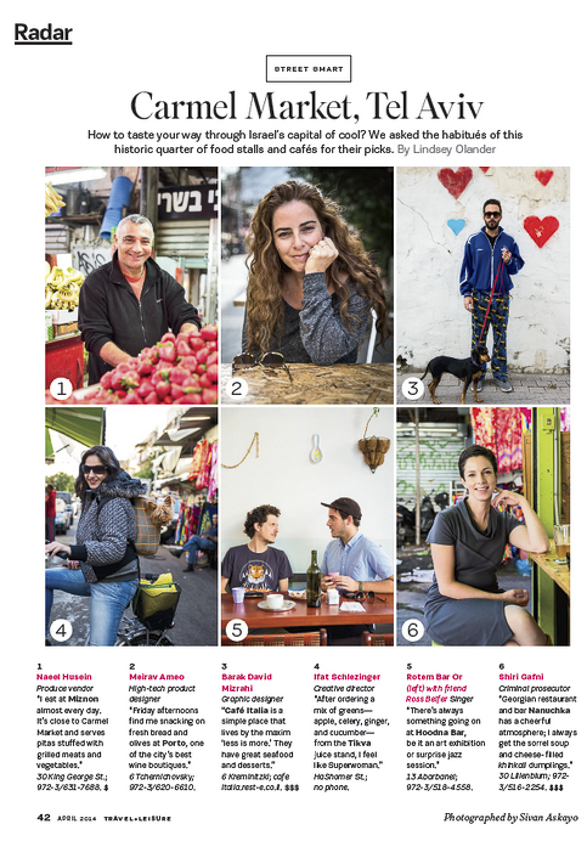 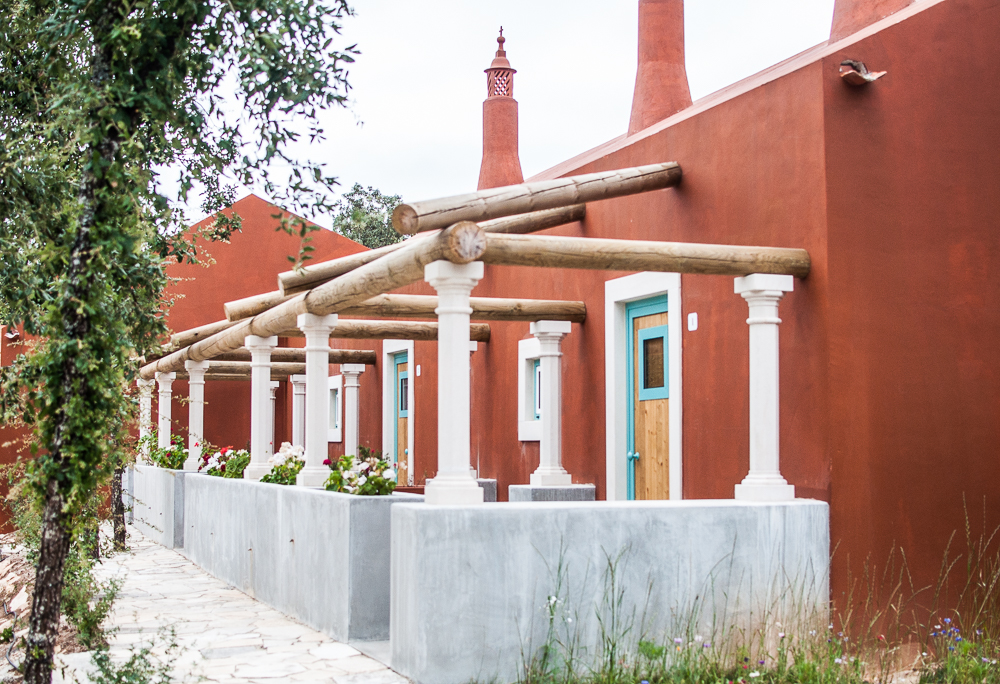 French Kiss your Life… in Paris