If you are on a diet, this post might ruin your efforts to lose weight. In that case, I strongly recommend you skip to the next post and just ignore this one. If you are not on a diet, have a sweet tooth, curious about new things or heading to Paris soon, this post is for you.

I was in Paris in March, shooting a story for Feast Magazine about Rue du Nil for their August issue. In addition, I was asked to shoot a cover for the Bite Size Pieces section of the most popular Parisian Eclairs of the well known pastry chef Christophe Adam, the man behind L’Eclairs de Genie. It seems as the eclairs’ collection is changing by the day and the season and the colorful eclairs come in a range of creative flavors, filling and topping. 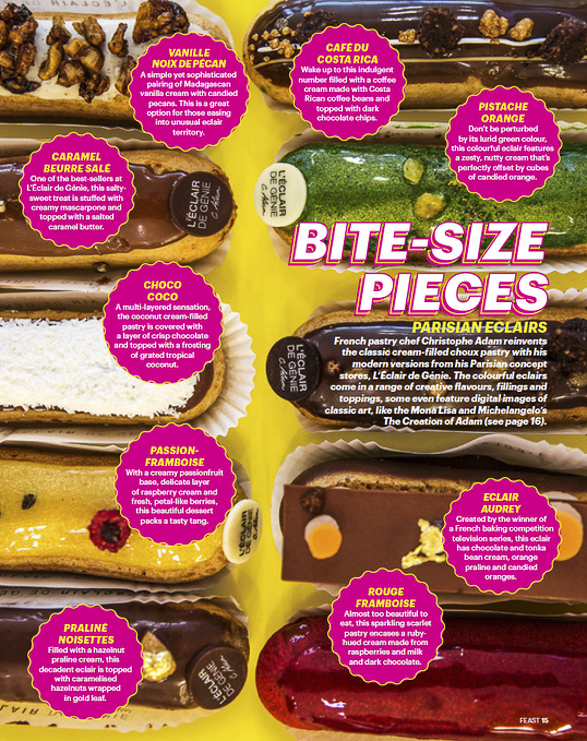 Even though I got from Feast Magazine a detailed list of the eclairs they wanted me to shoot, not all the eclairs were available on that day but some different flavors were presented on the counter. I arrived to the store quite early before its opening hours, just so I can have the space (and the eclairs) for myself but within minutes after its opening, the store got crowded by hungry and curious costumers.

Of course I had to try! At least three of them.

My favorite was Eclair Audrey, named after Audrey Gellet, who won a French baking competition in a television series and was honored to create her version for L’Eclairs de Genie. The eclair has chocolate and tonka bean cream, orange praline and candied oranges.