Aveiro, The Venice of Central Portugal 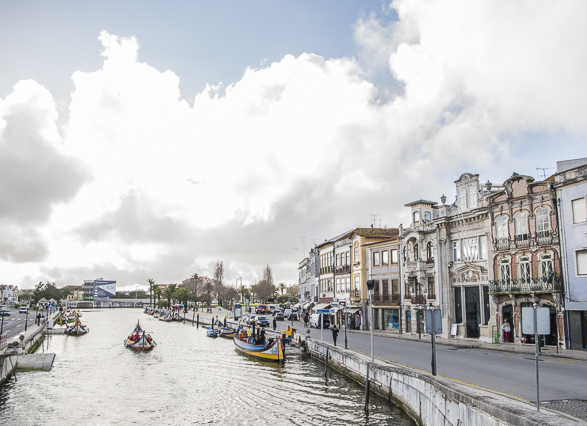 My first introduction to Aveiro in Central Portugal was through the window of a train.

Last year I was taking a train ride from Lisbon to Porto and the train had a stop in Aveiro, allowing passengers to get off the train and get on. I remember when I looked outside the window, the first things I have noticed were the marvelous blue tiles and the figures decorating the walls of a white washed building. (The old train station) This sight got me fully awake. I remember writing down the name of the station ‘Aveiro’ and made a note to myself to be back and see that place again and not only through a window of a rushing train.

So here I am! A year after. I am keeping my promise and visiting this city.

Aveiro is the second biggest city after Coimbra in Central Portugal. I have stayed only 24 hours in Aveiro and I can easily describe it as a must destination for Art Nouveau lovers and for those who blue azulejo (Portuguese tiles) make them tick. (Me).

Here are some of my favorites ‘to do’s’ of the city of Aveiro;

* Taking a Boat Ride along the Canals: Aveiro is known and nick named as the ‘Portuguese Venice’ thanks to its canals, the bridges over the canals and the painted colorful moliceiros (boats) which replace the gondolas in Venice. The original usage of the moliceiro was to transfer the harvest of seaweed, which was the main source of fertilizing the farmland of Aveiro, but these days they are mostly touristic and used for boat rides along the canals. The moliceiros are known for their bold colors and humorous decorations (including nudity) that ridicule situations of everyday life. Even though it might be too touristy (and I’m against everything touristy) sometimes it’s fun to have a boat ride, especially before sunset. 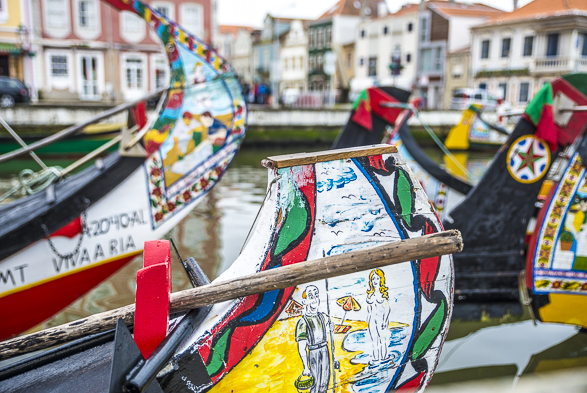 * Aveiro’s old Train Station: Even if you don’t travel to Aveiro by train, don’t miss a visit to the old train station. The white washed facade is covered with blue Portuguese tiles (azulejos) which tell a story of a typical everyday life in the ancient times in Portugal. This train station was built in 1861 and the constructions last for three years. It was opened for service on April 10, 1864. This station is currently not in use, as a new and modern building next door is now serving as the new train station. If you want to learn more about the history of the city, there is no need to open a History book. Just tour around this station. 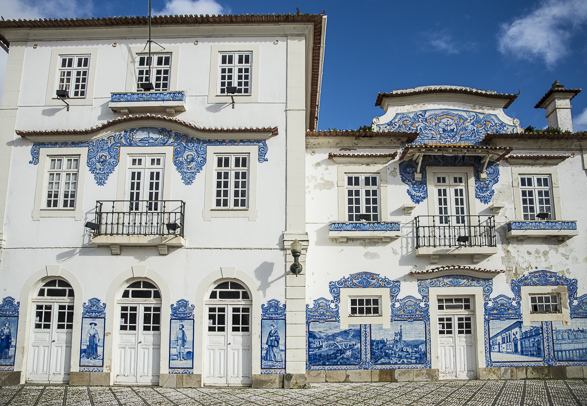 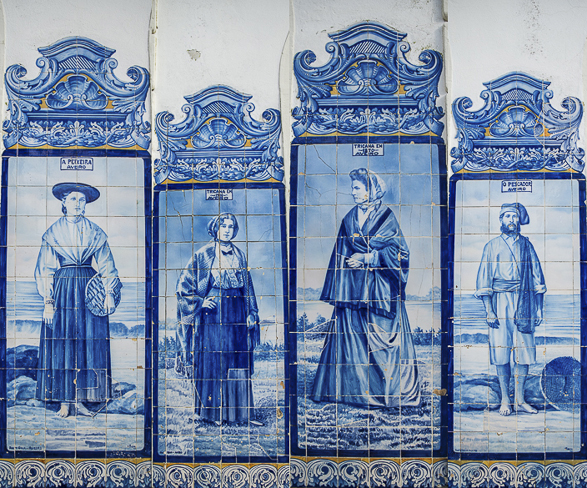 * Art Nouveau Architecture: If you are a fan of Art Nouveau movement in general and Art Nouveau Architecture in specific, you should visit Aveiro. Walking in the streets, especially alongside the river, bring a lot of encounters with this style; The usage of exposed iron and large, irregularly shaped pieces of glass for buildings is fairly common. There is also a special museum for Art Nouveau, Museu de Arte Nova, located in Casa Major Pessoa, a true icon of Art Nouveau architecture. Casa Major Pessoa was initiated by Mario Belmonte Person in 1907 and was designed by the architects Francisco Augusto da Silva Rocha and Ernesto Korrodi .The building was purchased by the city of Aveiro in 2004 and in 2008 was converted to what it is now, a museum. It is a relatively  small museum. The spread of Art Nouveau (Arte Nova) in Portugal flourished mostly in Porto and Aveiro. 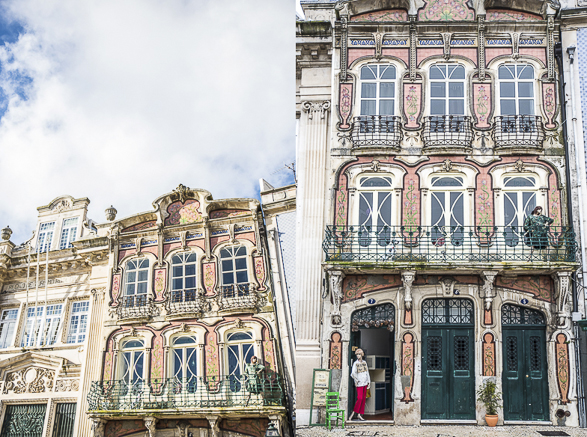 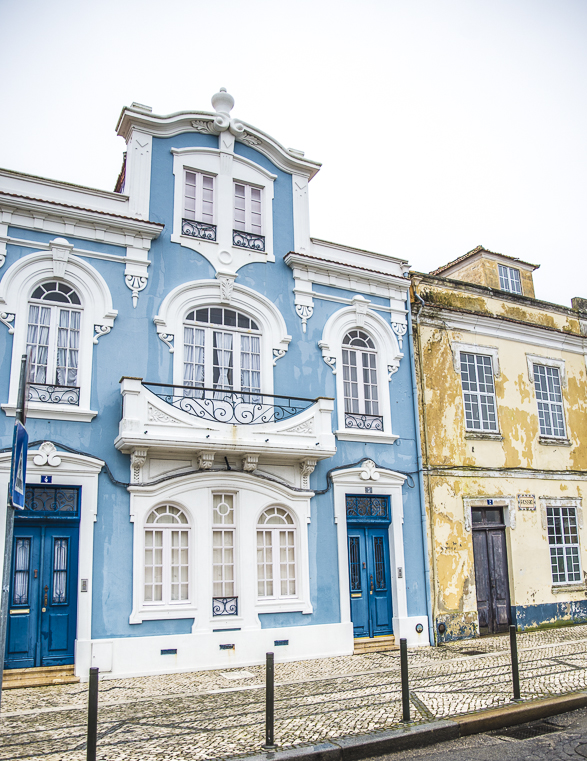 * The Biggest Collection of Colorful Portuguese Tiles: I have been to various cities in Portugal before visiting Aveiro, but walking through the little streets of the old part of the city, it seems as though Aveiro has the biggest and maybe the most diverse collection of Portuguese tiles which are decorating the walls of the buildings. The first time I saw this design called ‘walls covered with ceramic tiles’ was in Lisbon. I remember taking a lot of pictures of these building (mostly located around Alfama area). But being in Aveiro, I didn’t put the camera down. Every building was different than the one next to it, both in color and the pattern of the ceramic tile, making my photography experience even richer and more exciting. 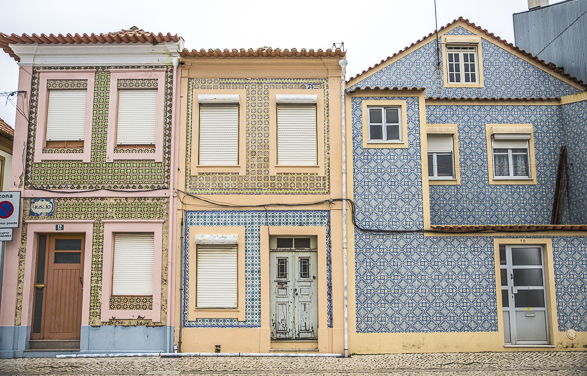 * The Stripped Houses of Costa Nova: A short driving distance from Aveiro toward the ocean, you can discover a typical beach where the charm of many wooden houses with colorful strips is quite exceptional. If you can plan your visit, make sure not to miss the sunset or sunrise over Costa Nova, when the colors of the houses are dramatically showing. Beside the ‘haystacks’ (the name for these wooden stripped houses) Costa Nova is also one of the great Portuguese beaches for water sports, windsurfing and kitesurfing. Walking along these colorful houses made me feel as I was visiting the movie set of ‘The Truman Show’, maybe because the houses looked quite the same and the streets were quiet and still. Or maybe my imagination was just running wild. Regardless, bring your camera to have some picture-perfect spots there, all hours of the day. 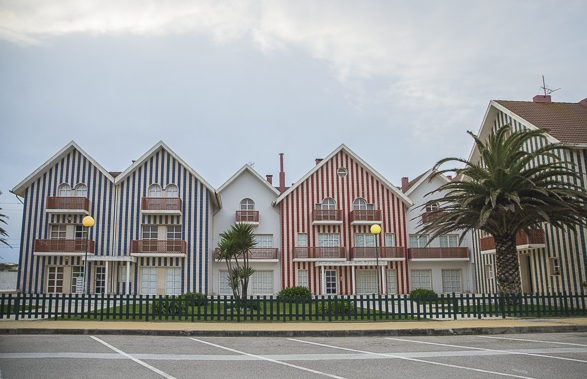 * O Barrio Restaurant: O Barrio Restaurant (opened in 2012) is a young, trendy and hype restaurant which gives the traditional Portuguese cuisine a fun twist. The owners of O Barrio wanted to keep the roots and tradition of Aveiro, but also to approach a younger crowd with less traditional palette. The menu is quite colorful and diverse; small fish dishes, grilled and stewed, small burgers, sea food soup and great desserts. Even though I’ve spent only 24 hours in Aveiro, I made sure to visit the restaurant twice(!) as I wanted to try the different dishes as much as possible. The service is really good and friendly and there is a good chance to see one of the owners enjoying a family dinner sitting at the table next to you. 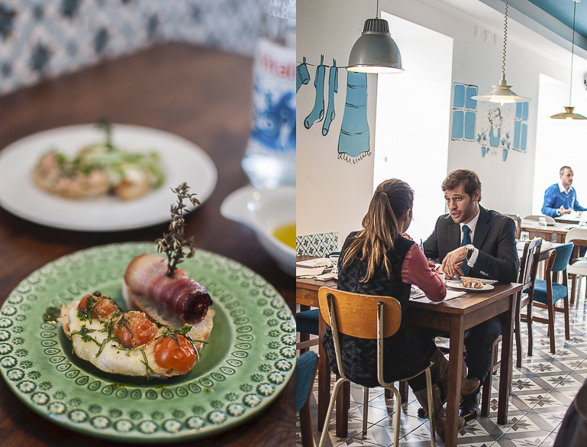 My favorite dish in O Barrio (rest assure I had it twice, right?) was the combination of a Cheesecake and the Ovos Moles. Ovos Moles is a typical dessert from Aveiro, made with egg yolk and tons of sugar. All of this goodness comes with an orange flavor ice cream and crusted dough. For me, it looked like the Pac Man figure I used to play when I was way younger. Nevertheless, this dessert is delicious. Don’t miss it. 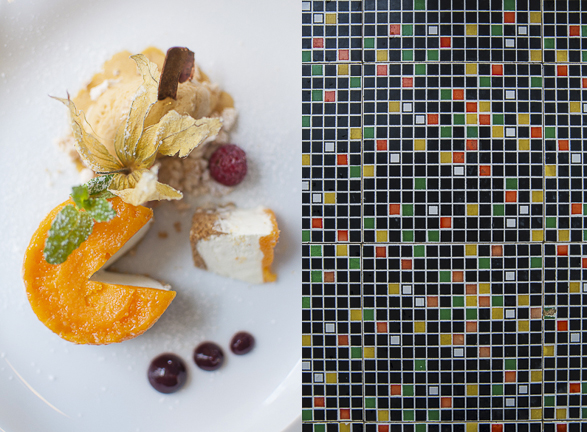 Whether you are taking a train from Lisbon to Porto, or going on a day trip out from Coimbra, don’t skip Aveiro. Spend at least a day or two (I wish I had more time to explore) and enjoy a quiet city, which combines the old and the new, the crumbling buildings in the old town vs.the modern and advanced University of Aveiro, the colorful tiles decorating the buildings and the over – the  -top sweet Ovos Moles and other egg based desserts.

Skip Town: Through Their Eyes

French Kiss your Life… in Paris

A Guy meets a Girl with a Camera