A Long Weekend in Porto 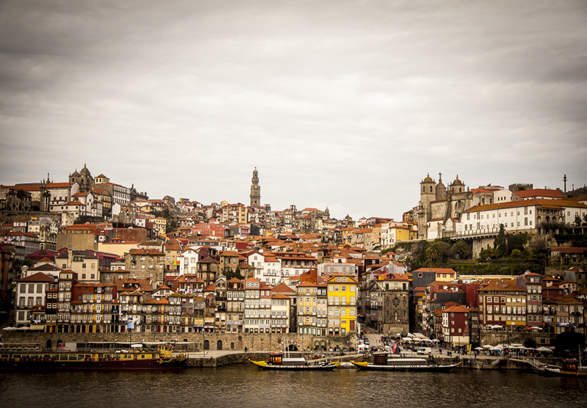 I traveled to Porto mostly because I had an image in my mind of colorful low-rise buildings streaming down the hills all the way to the river ; an image I had to see in my own eyes and shoot with my camera. (like the one above)

An IMAGE…This is what photographers are mostly after… The rest is just a bonus.

But don’t get me wrong. I loved the wine! – I drank three kinds of Port wine in one lunch and one dinner. I loved the food! – I ate in Rui Paula’s DOP gourmet restaurant a five-fish dish, which I had to eat only clockwise and I loved the Azulejo tiles! – I didn’t stop shooting them.

But Porto mostly fascinated me for its magical atmosphere of an old mysterious or gothic (as my friend called it) city. 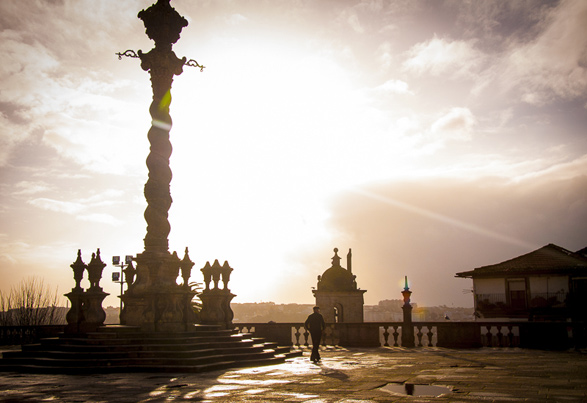 There was something quite special about this city. When I climbed to the top of the hill where the Cathedral is located and overlooked the red roofs of the old crumbling buildings, I instantly felt there are few sides to Porto; The Porto of the top-level, with the old churches and the bell towers and the one of the low-level, with the residential colorful buildings. I stayed in Infante Sagres, a five-stars hotel in the center of the city, but I could hear through the windows the seagulls in the sky and the church bells beaming in the background. I felt as I was on an island.

Although it is not an island, walking along the Riberia of Porto, which is one of the oldest parts of the city and was classified as World Cultural Heritage by Unesco, might give you the feeling you are on one. The river front and the dotted ships on the Douro river are really close.

Porto DOES have all the right ingredients for a perfect long weekend or a short vacation in Europe;  Its gastronomy is a mirror of its cultural diversity and there are a lot of great chefs’ oriented restaurants in the city. The Port Wine, which stands out from ordinary wines thanks to its huge range of variety. The different kinds of architectural styles; from the Neoclassical to Art Nouveau (I specially loved the variety of the signs fonts) and of course, the comfortable weather.

When you book your next Porto vacation, I highly recommend to follow O Porto Cool blog. It covers almost every corner in the city and it is very up to date. I checked it on a daily basis and it really made my visit more enjoyable, knowing where to go, on a specific time of the day. 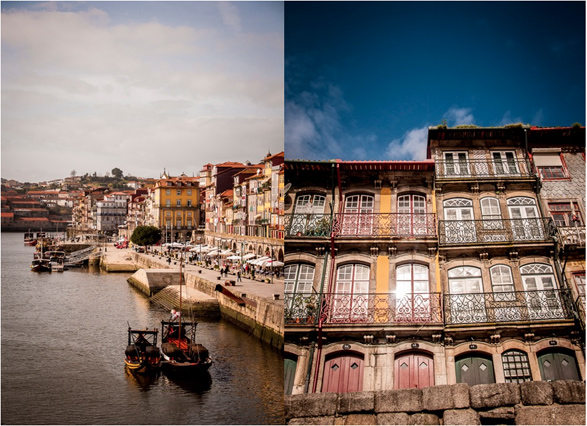 There are so many things to do and see in Porto. A long weekend that lasts for three days obviously will not be enough, but beside the beautiful churches, the marvelous castles and other iconic buildings, here are some highlights I recommend not to miss.

Might be one of the most beautiful train stations in the World, Sao Bento Railway Station was opened to the public in 1916 and is well known for its walls covered with 20,000 splendid azulejo ceramic tiles which describe the  History of Portugal. It took Jorge Colaço, the artist, 11 years to complete this building. The railway station is located in the Almeida Garret Square, in the centre of the city. I happened to be there on a Saturday rainy morning, while I was looking for a place to hide from the heavy rain. It was quite interesting watching the people’s dynamics, which might look the same in every major Railway station, despite its location. This place is beautiful all year around and probably most hours of the day. Indulge in this beauty and pay attention to the little details. 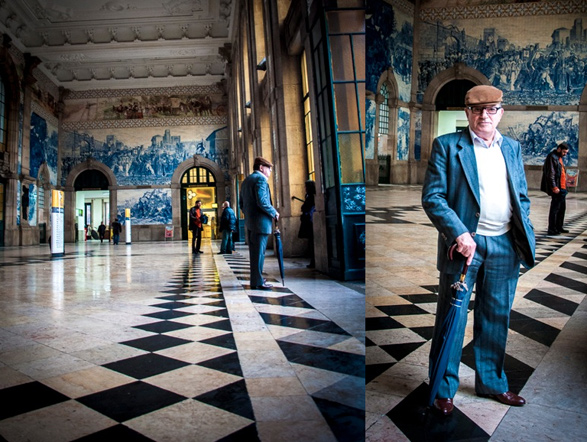 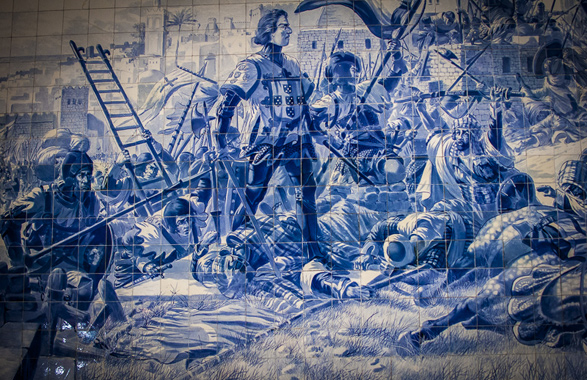 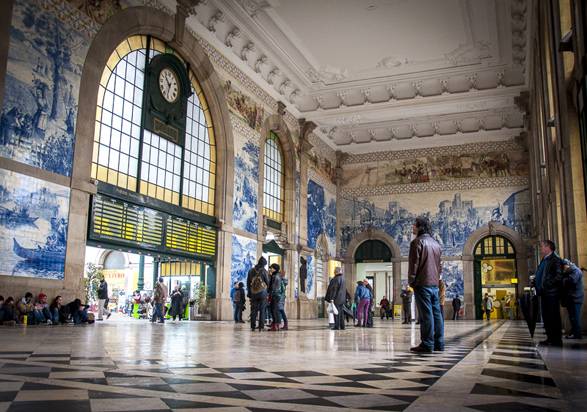 This is a great spot for a Weekend brunch, especially if it is raining outside. (At least that what happened to me). I loved the contrast between the raw grey industrial walls and the warm chocolate-colored wood furniture and the green plants. The furniture and accessory have that vintage touch, which I found quite unique and surprising. The place serves as a restaurant and a bar, where at the back of it, there is a minimalistic clothes store.

And then, there is the guest house, which is designed in the same atmosphere of the restaurant; grey industrial walls and minimalistic wooden beds. I love that Miss’Opo is a multi-functional space that can offer both food, style and accommodation in style. It is definitely one of the great spaces that Porto has to offer to a young and hype crowd. 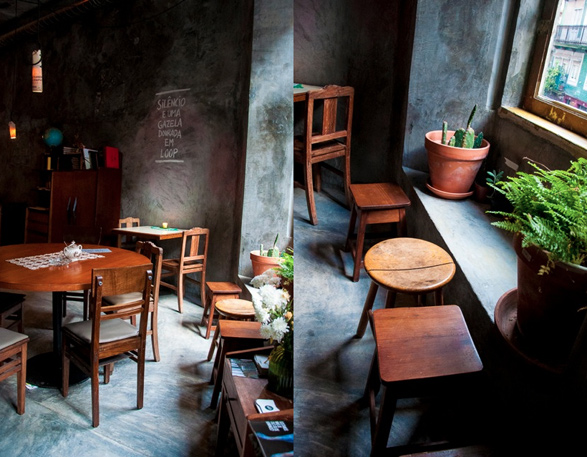 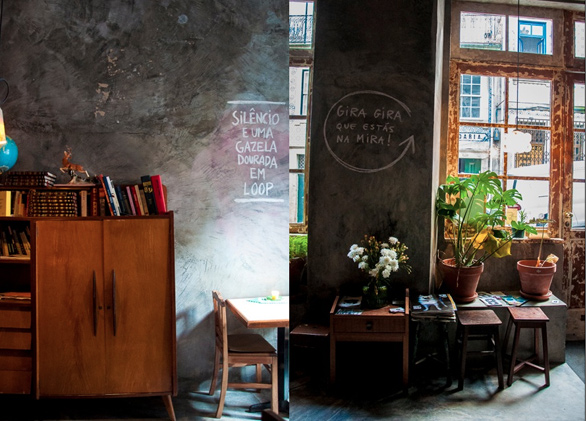 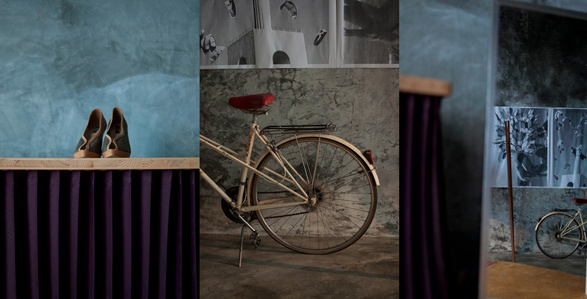 Casa da Música, designed by Rem Koolhaas, is the first building built in Portugal which is dedicated entirely to music in various aspects; presentation of music (concerts), education of music and creation of music. The building was intended to be finished on 2001, to mark the year in which Porto became a Cultural Capital of Europe but eventually Casa da Música opened its doors to the public on April 15th , 2005. I first heard about Casa da Música when I read my travel guide about Lisbon and Casa da Música was a suggestion for a weekend getaway. The VIP Room grabbed my attention right away and I knew it was something I had to shoot. It is a multifuncional space, mainly used for sessions for small groups, installations or ceremonial occasions. The room pays an homage to Portuguese tiles and each of its panels is a reproduction of an original panel to be found in different museums in Portugal and the Netherlands. When I got to the building I was quite surprised to discover that the next time I can see the room was at 4pm. Mind you, it was only noon, but eventually (thanks to my Journalist pass) I had the chance to be in the VIP Room by myself and shoot it as much as I want. When you plan your visit in Casa da Música, plan it wisely time-wise. And treat yourself to a concert. It is worth it. 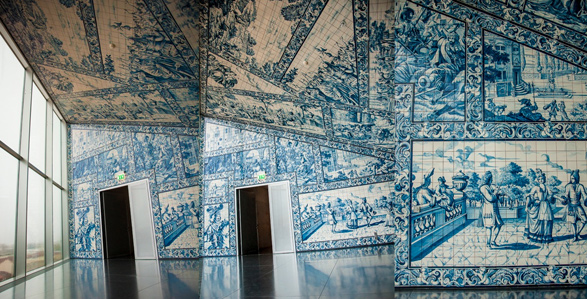 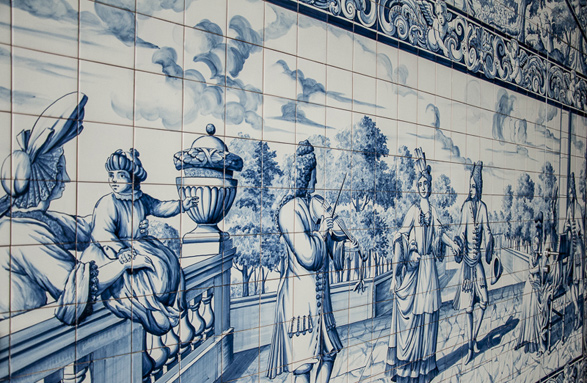 Another known architectural jewel in Porto is Livraria Lello, a bookstore well-known for its red stairways that look like a giant tongue. This beautiful bookstores, which was opened in 1906, was chosen one of the ten most beautiful bookstores in the world. The store was designed by Xavier Esteves and it is the flagship store for one of the most important Portuguese publishing houses. Co-owner Antero Braga is usually around, knows the Portuguese book market in and out, and will be glad to help you find exactly what you want even when you don’t have a clue about what that may be. Photography inside the store is not allowed but if you flash your Journalist card again and show up just before the store is opened, than taking pictures might be an option. 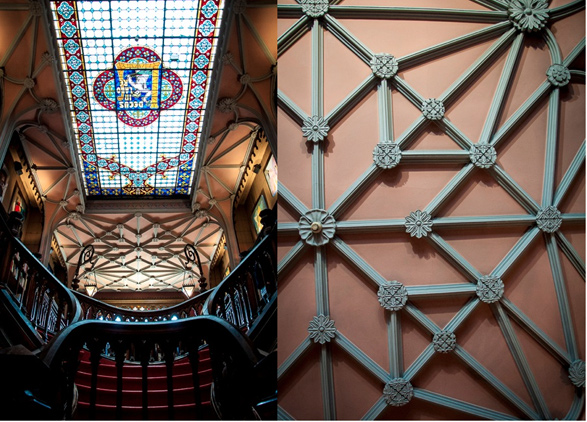 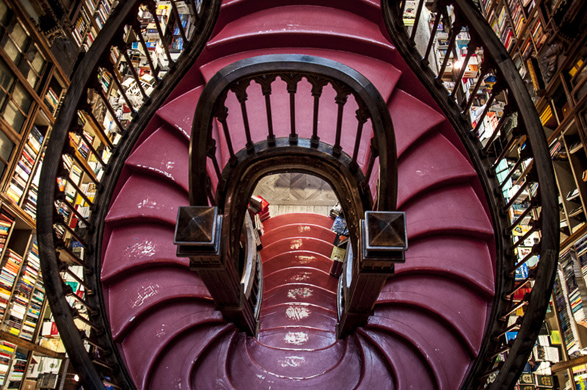 Speaking of books, Book Restaurant (which is next door to Infante Sagres hotel) is designed as a library as well and reflects the connection between literature and gastronomy in a very contemporary way. The architect is Pedro Trindade and the chef is John Mendes serving Mediterranean cuisine. I first saw the restaurant from the outside and was curious to see the decor. When I got in and sat down, the waiter handed me the menu inside The Historia da Filosofia book. I knew my dinner couldn’t be better than that! 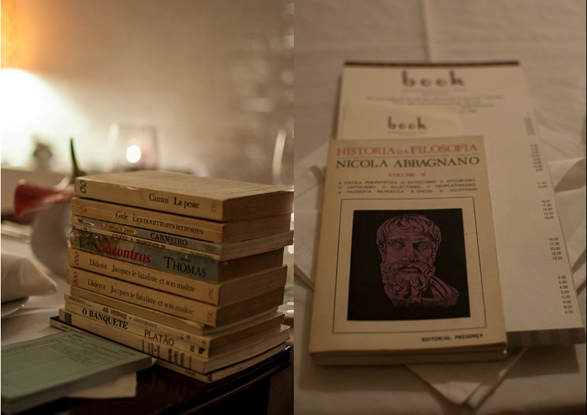 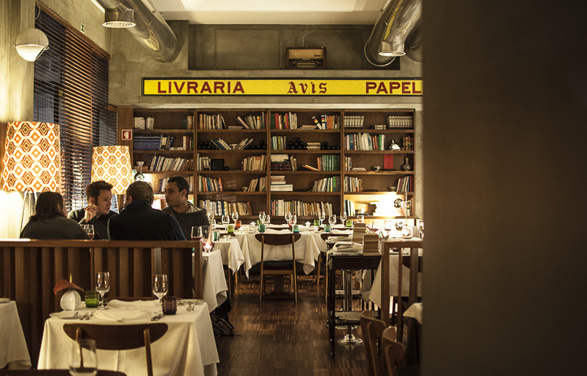 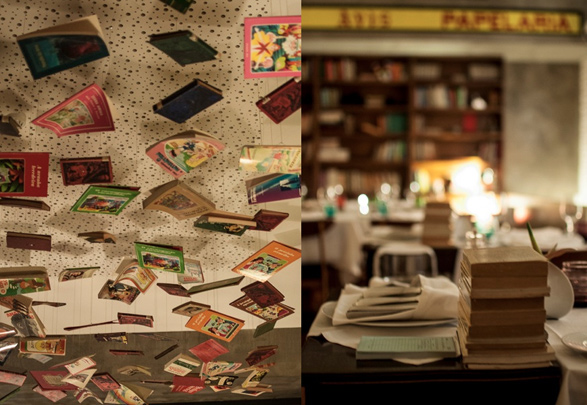 Era Uma a Vez em Paris, Once Upon a Time In Paris

One of the busiest and fashioned streets in Porto is Rua Galerias de Paris, which, no wonder, is spotted by some cafes and restaurants that remind you of Paris. There is a cute cafe called Galeria de Paris which was quite busy during lunch time, and next door there was Era Uma a Vez em Paris, a dark cafe with great green lamps that grabbed my attention right away to get inside. When I got in, I could easily think I entered a Bohemian Parisian cafe back in the 20’s. No wonder. Era Uma a Vez em Paris, which means ‘Once Upon a Time in Paris’. I loved the decor. The dark room with the red walls, the velvet heavy sofas and the velvet green lamps transformed me immediately. Really recommended during night time, when the place becomes more intimate. 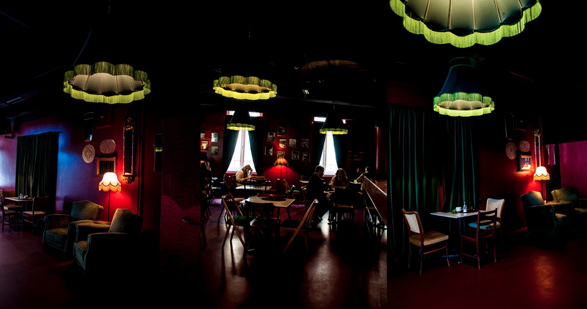 Might be one of Portugal’s most famous cafes with a beautiful interior, Majestic Cafe is one of the best historic cafes in Europe and one of the most beautiful ones in the World. The façade, same as the interior, enlightened the street with its Art Nouveau decoration, designed by architect João Queiroz. It has a great atmosphere and not only a touristic attraction. Come with your cameras because pictures are allowed but also sit down for a coffee and a Portugese cake. 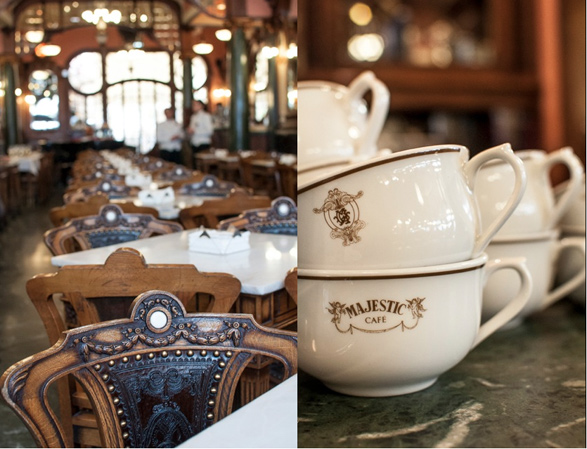 B & B hotel is a great alternative for the budget traveler. The hotel, which was opened in the end of 2011, is located right in the city center in an Art Déco building that used to be cinema “Águia d’Ouro”. The hotel has stylishly furnished rooms and a modern design and despite its luxurious facade, it offers an econo-chic concept with good price for travelers.

A Vida Portuguesa is a concept store I first discovered in Lisbon. I was quite happy to find a similar store on Rua Galerias de Paris and get some hand made olive oil soaps with funny wrapping. Definitely, get a glimpse inside the store.

DOP Restaurant which stands for ‘tasting and daring in Oporto’, is a gourmet restaurant owned by the chef Rui Paula, who combines traditional Portuguese cuisine with international flavor. The restaurant is located in Palácio das Artes (Palace of Arts), an original building from the 14th century, which used to be a youth foundation but recently was reconstructed and reopened as a restaurant. Highly recommended and preferred to book in advance.

De Castro Gaia Restaurant is located in The Porto Cruz Space  just acros the river of Porto. The chef Miguel Castro Silva, unites the Porto Cruz wines with the culture of gastronomic Portuguese cuisine. Better take your drink to the rooftop of the building and sip it while looking at the beautiful view of Porto.

Porto is by far, a very fascinating city to visit. You can see it by bike, on foot and even by boat. Take advantage of the great touristic information and plan a great vacation with Porto Card. It will make everything much easier. 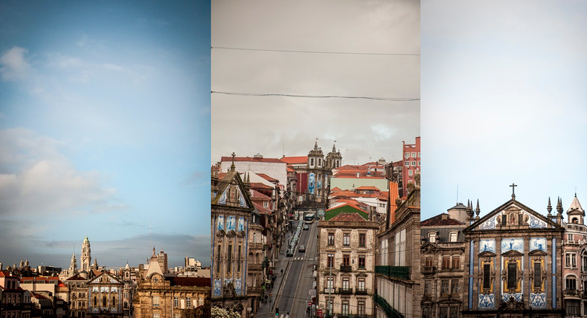 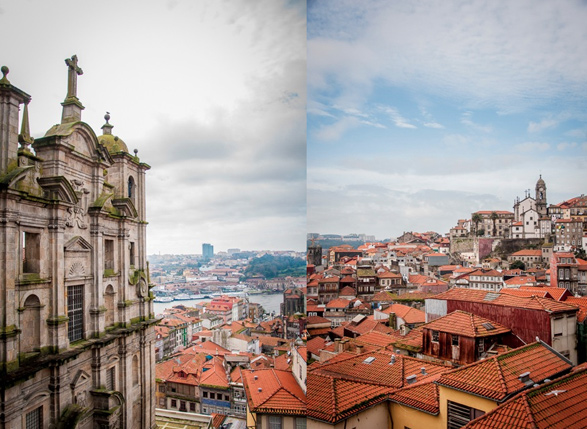 The Art of Travel and Why we Travel