NY Fashion Week: A Day in My Life 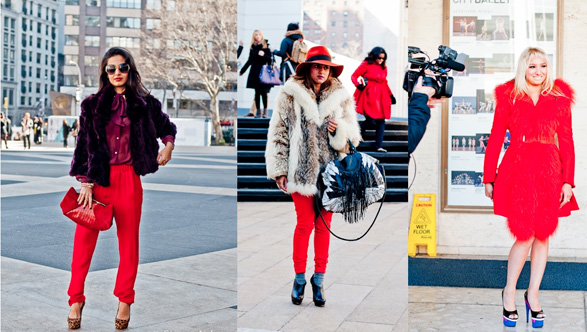 6:00 in the morning: I get up, drink my morning coffee while checking my emails. Recharging both my batteries (another cup of coffee) and the camera’s and heading out to the Gym. I need to have at least one hour work out, otherwise I really feel bad walking among all those models/fashion editors/twiggy fashionistas. Thank God my Gym is only one block away from Lincoln Center. I can make it on time to the ‘before’ of Tory Burch’s Fashion show.
.
8:30 am: I am in Starbucks the corner of 63rd and Broadway. i think this branch might be the busiest in the city this morning. A long line of ‘fashionably-dressed -caffeine-addicted’ people holding their iPads/Camera/Hand bags I wouldn’t mind adopting.
Having some small talks, getting some of yesterday’s reviews and off to Lincoln Center Plaza. Some people at the entrance giving away the ‘Daily Fashion Front Row’ and some other fashion magazines. Who has time to read, anyway?
. 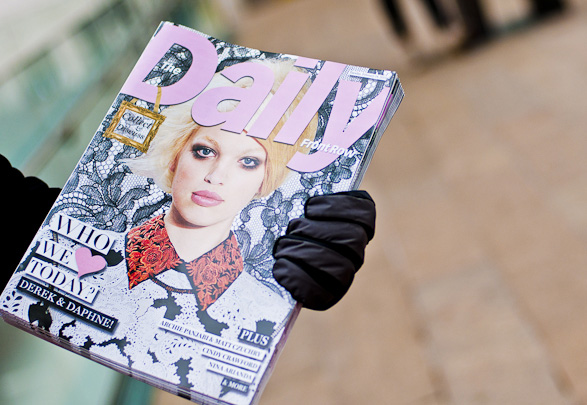 Tori’s fashion show is at 9 am at the Alice Tully Hall on 65th street. It probably started already and I missed the people who were getting in. It’s the first show of the day and people are more relaxed. That will change within an hour or so. Guaranteed.

9:15 am: I walk back to Lincoln Center’s plaza, on time to catch the J.Crew fashion show at 9:30 am. My God! So much color! Then I see a glittery green skirt walking towards me. One of the photographers tells me it is Kelly Killoren from Real Housewives of New York City. I don’t really care. All I see is that glittery sequined green skirt with a matching green bag. 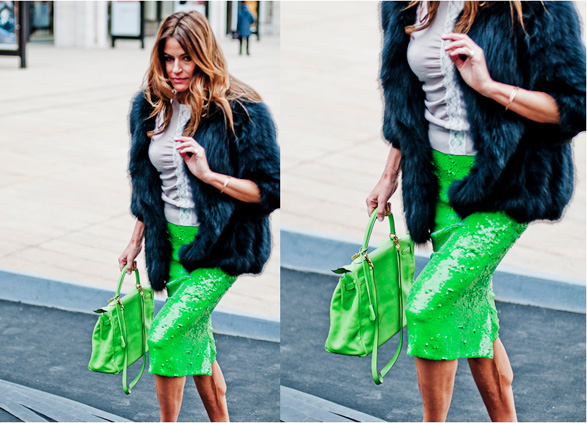 At 9:30 am all the late comers start racing towards the fashion hall. On heels!

The J. Crew show is till 10:30 but 10:00 am is the Badgley Mischka show. Another party of people is coming while the J. Crew crowd is getting out for a cigarette break and to have their pictures taken. 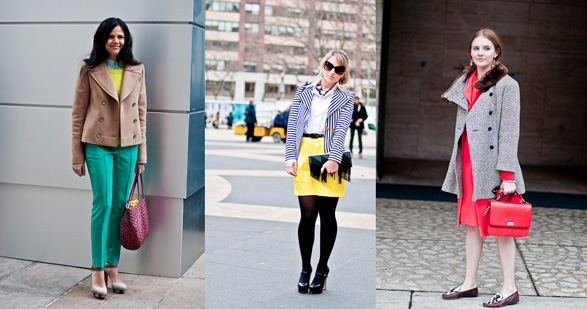 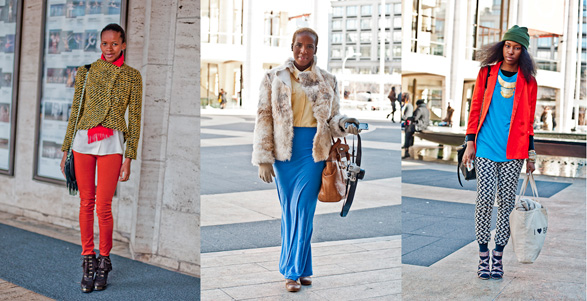 All of a sudden I notice a group of tall people and among them a familiar blonde figure. But who is she for God’s sake? I must admit that for a second I thought it was Georgina May Jagger, the daughter of Jerry Hall and Mick Jagger, but one of the photographers next to me whisperes in my ear ‘It’s Lara Stone, can’t you tell?’. They are all so look alike. 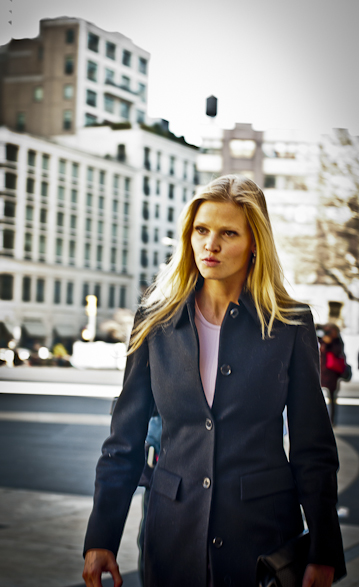 Around 10:30 more people are coming out of the J. Crew show and I can catch some more color splashes with my camera. So beautiful.

Note to self: Check out the J.Crew catalogue I got in the mail and mark some new items to buy. A must!

Then I spot Maria Duenas Jacobs, the Accessories editor at Glamour magazine. And she is wearing jeans. But she is so beautiful, so it is forgiven 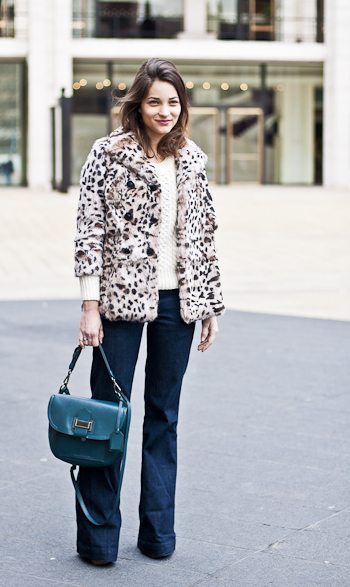 Talking about colors, then out of the Mercedes Benz halls I could spot a fuchsia coat walking on two skinny legs and all photographers are running toward it. Og my God, it is Anna Dello Russo. I decide to also run after this coat with its two skinny legs and photograph Anna. And she is so slim….and she is so happy to be photographed with well, almost everyone by everyone. Some girl from a European TV network asks her what was her favorite show and the fuchsia coat said it was very impressed by Prabal Gurung‘s latest collection. 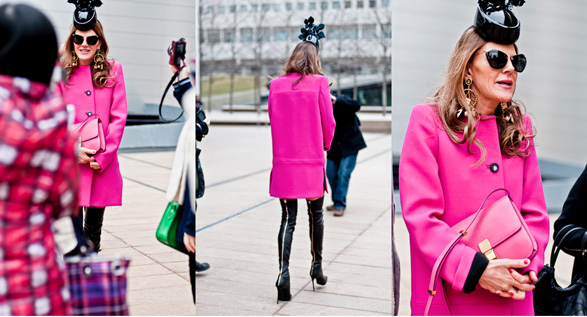 Then the  fuchsia coat hurries to the next show, and we , the photographers, take advantage of the brief break in between the shows to take more pictures of the people outside.

Disclosure: As we, the photographers, want to shoot, the people who come to the shows want to be photographed. They wear their best clothes (and I wouldn’t be surprised if some of them are hiring a stylist just for this day) and they pose in front of our cameras, like, if not as, some of the professional models in the shows. Every one wants to find himself/herself the next day on one of the fashion blogs or websites. Speaking of which, I just recognized Scott Schuman, who is The Sartorilaist. Oy, I never thought he is so short and compact.

So if he is here, I thought to myself, then his French girlfriend, Garance  Dore, or whatever her name is, should be here as well. And indeed, few feet away I saw Garance taking pictures of some girl for her blog. I’m a bit disappointed by what she is wearing, no need to say more. One can sense the excitement in the crowd when Scott and Garance are around. Who doesn’t want to find himself at the Sartorialist as a good dresser? 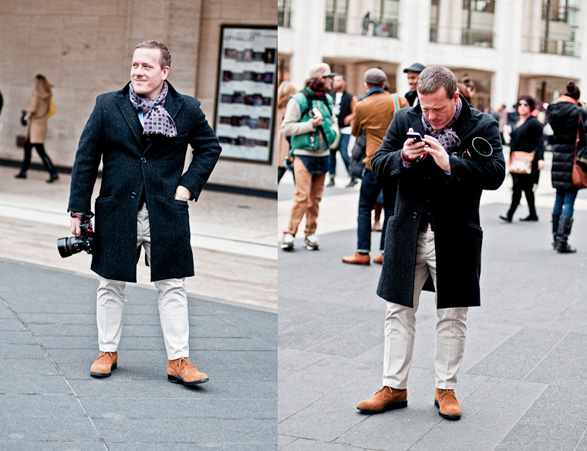 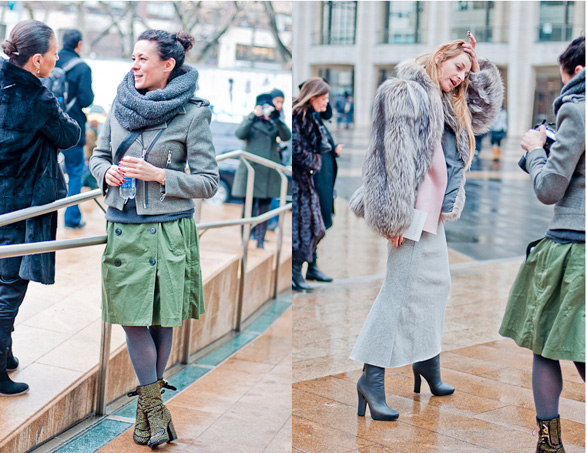 Meanwhile I see Katie Couric and then Taylor Tomasi Hill the fashion editor of Marie Claire, wearing high heel sandals to die and kill for. Perfection! 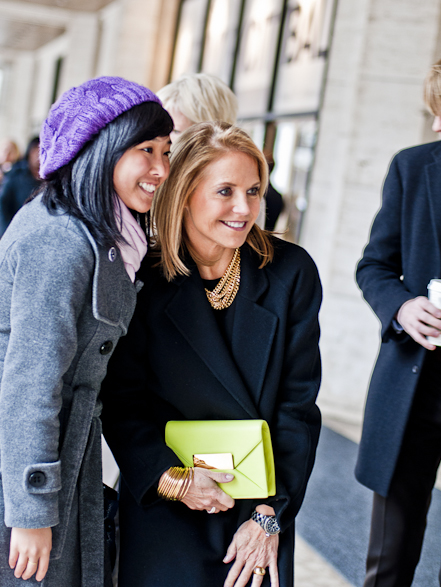 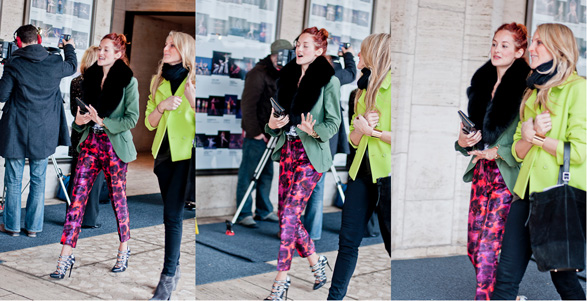 11:00 am: I’m having another coffee break at Starbucks, same place. same people. Who need caffeine as well. Everyone with their iPads, iPhone, Blackberries, and I can already imagine the graph of Twitter sky rocking. After my coffee break, I decide to change my location and head down to Bryant Park. If I time it right, I might get there on time when people are leaving Vera Wang’s.

13:00 pm: So if I am already at the park,  I should go and say hi to a friend of mine who is a make up artist at one of the shows. No way I can get an entrance to behind the scenes so my friend is coming outside, we grab lunch, breath some ‘normal’ air and I head downtown to Chelsea. A friend who is having a gallery there is renting it out for a fashion display and invited me over.

15:00 pm: I am meeting with my Amsterdam friend, Elyne, She has decided to focus on photographing mostly shoes. While waiting to get in the Chelsea gallery, I show her my shoe collection I got on my camera. The hand bags collection, I should show her later.

The Chelsea gallery display was packed with a different type of crowd than the one in Lincoln Center. The Chelseas are more daring, less trendy than the Upper West Siders. The Fashion show was of Viktor Luna, a Mexican-born designer, who grew up in Los Angeles and works in New York and his style is more of Punk Rock and Pulse. Except for one pair of pants I could see myself wearing, the rest of his clothes were not really my style.

I looked at the models who were looking at us. None of them moved. Well, maybe only one moved, or someone moved her, I don’t know. They were standing there. Frozen. 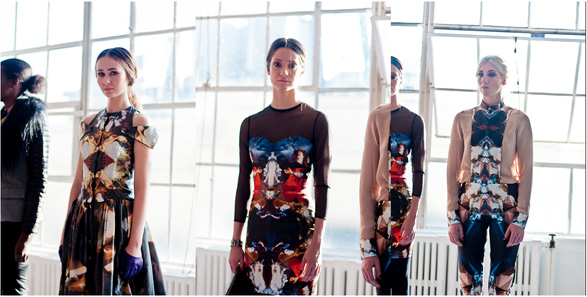 I got bored of looking at people who are looking back at me, so I’ve decided to take some pictures of the audience. At least the audience was more ‘alive’ and interesting. Then I notice two drag Queens. Was Pricilla Queen of the Desert making a comeback? 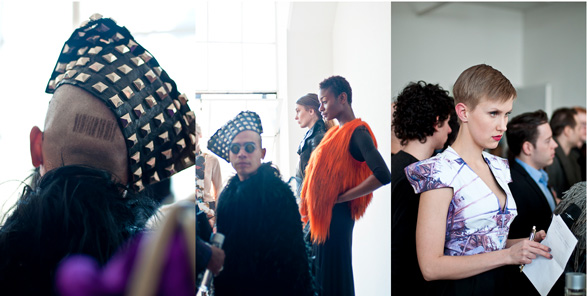 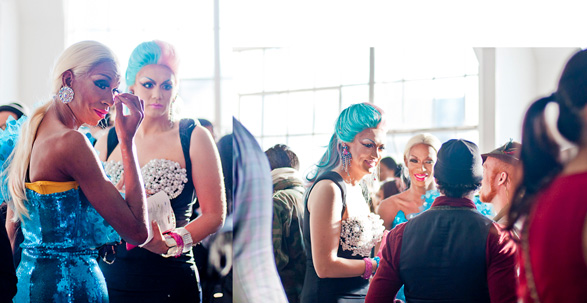 It took me twenty minutes to view the show to decide to take a taxi uptown back to Lincoln Center, to make it on time to my favorite, Diane von Furstenberg. Another round of shoots to catch more of the people who come late. Elisa Sednaoui, the model who DVF hosted on the first fashion week was fashionably late. She was wearing all Pink. Well, she can do it. 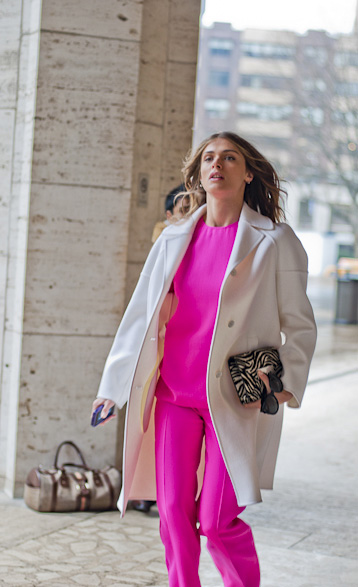 17:00 pm: I am going home to edit some of my shots, recharge the batteries (and the camera’s as well), changing clothes and off to the Meat Packing area.
20:00 pm: The Meat Packing District is packed. The French Purple magazine is giving a party at the Standard. Among the party guests I could spot some fashion bloggers, fashion assistants, fashion wanna bees and of course, fashion victims.

22:00 pm: I’m running out of subjects for small talks. I’m getting bored. I’m going back home.

Tomorrow is another day. 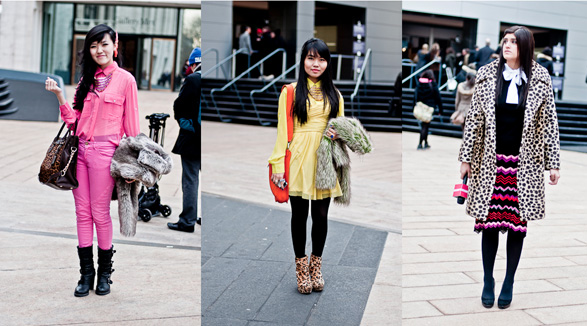 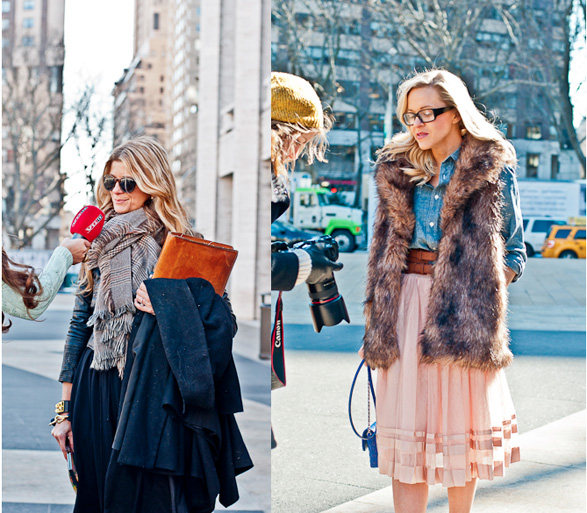 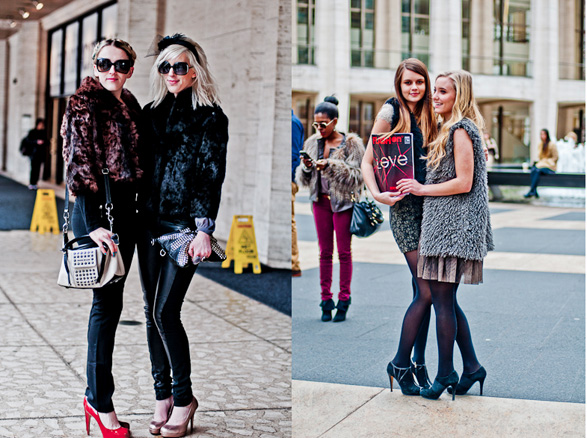 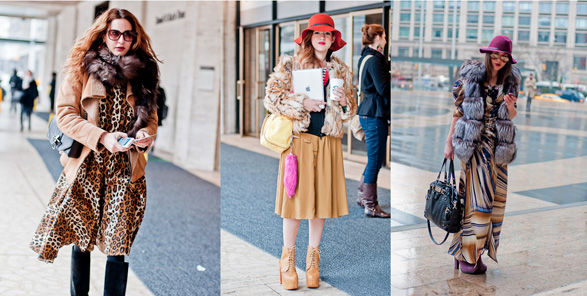 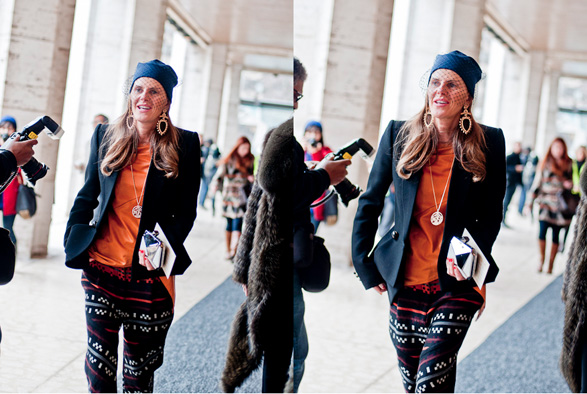