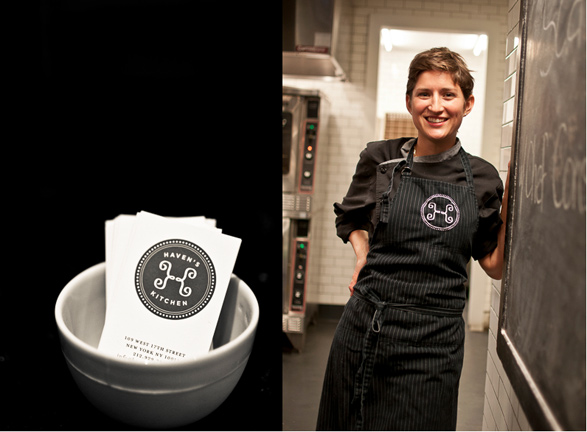 As I wrote in a previous post, the truth is that I don’t know how to cook.

If you see me in a cooking class, it will not be a mistake or a fata morgana. I will be there for the sake of photographing first and eating after.

I was really happy to hear that Chef Constance from Cook’n With Class, whom I met few months ago during a Morning Market Class in Paris, was coming to NY, my hometown to teach a SeaFood class in Haven’s Kitchen in the West Village.

I admire Chef Constance for her charisma and how serious she is about food. The way she talks to people and explains them about the elements of the dish they are about to cook, the way she instructs how to use the cooking tools, and the way she does it both in French and in English, are all things I wish I could do. The only hint about her goofy and playful character is in her un-matching socks she is wearing.

She started cooking when she was eight years old. She used to make cakes every Wednesday in a pastry school. As she didn’t want to go to Ballet classes, her mom made a deal with her: She could go to the cooking class if she would take a Ballet class as well. So she did.

When she turned 15, she started a culinary school for five years. She admits the school was quite demanding, but it was the best training to learn the reality of this job. Some of her training were in Le Bristol, Le Meurice and The Ritz, all five stars hotels in Paris. When school was over she headed to  the Four Season Hotel in Palm Beach, in order to practice both her culinary skills outside of Paris and improve her English.

When she got back to Paris, she got hired as a chef for the American Embassy and the Unesco Ambassador and afterwards she was part of establishing a new restaurant with the sous chef she worked with in Le Bristol, called  Le Cristal de Sel. Mind you, she was not even 30!

After eight years of cooking she joined Cook’n with Class as she felt she was ready to teach others how to cook. If you visit Paris, I highly recommend to book a cooking class with Chef Constance. If you can’t make it to Paris yet, then check Chef Constance’s blog where she shares all the good recipes and the techniques she learned all over the world.

She specializes in fish and sea food. As I share with her the love of swimming, Constance used to do swimming races during her Summer days so it was quite natural for her to go towards products from the Sea.

This is why she taught that great Scallop class in Haven’s Kitchen. 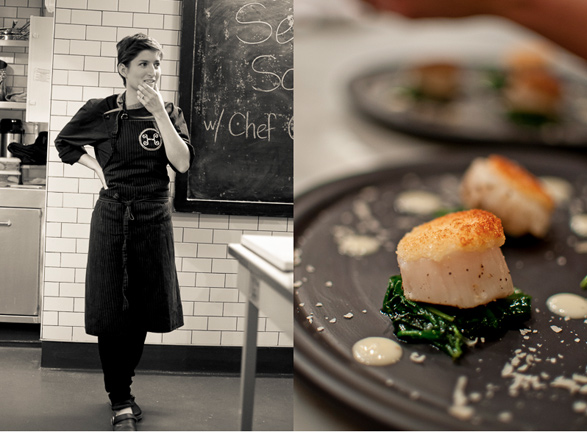 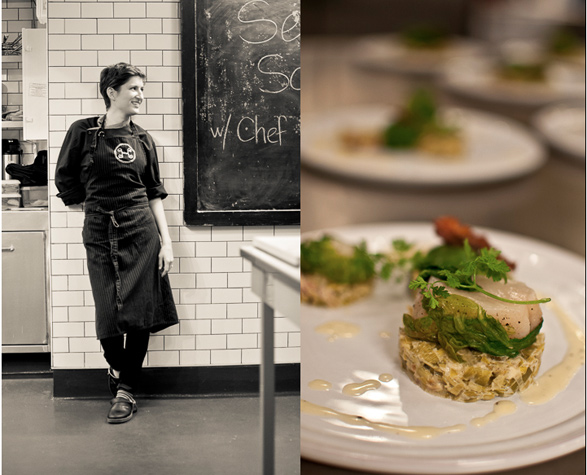 Haven’s Kitchen is a two-story-about to be-three stories space for cooking classes, events venue, a neighborhood’s cafe and a gourmet shop. All in one place in West Village. It became a gathering place to reconnect people with food and the community. The classes varies from beginners, wine tasting, barbecue and grilling, Holiday cooking and seasonal classes. As the classes vary, so do the chefs. Constance is not a permanent resident but a guest from Paris. How great is that to be in New York, in such a great school with a chef all the way from Paris!

I love the design of Haven’s Kitchen. The front of the store is a little cafe with a gourmet store and pantry. A tall wood table in the middle of the store, where people can sit, sip their coffees and read some cooking books, all left around on the tables. The pantry sells mostly Made in Brooklyn-Made in New York brands such as delicious jams, teas, chocolates, wines and honey. And then…the kitchen! Big working tables, tons of jars filled with herbs from all over the world, pans, pots, plates of all sizes, utensils and more. Such a well equipped space that makes the cooking seems so easy and obviously, enjoyable.

The second floor has a great space which is rented for some food venues and events and a wine tasting bar. The third floor will have more room for classes in the near future. The space is definitely a cooking Haven. 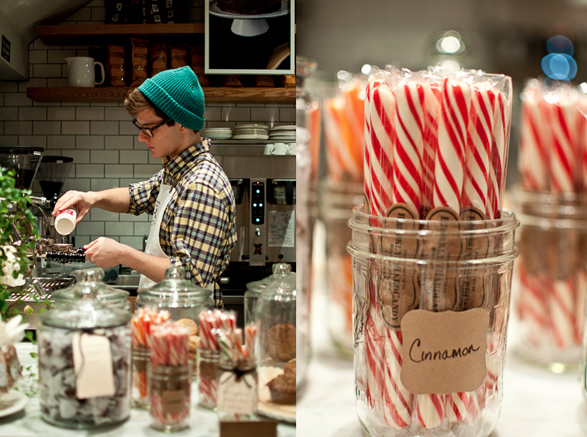 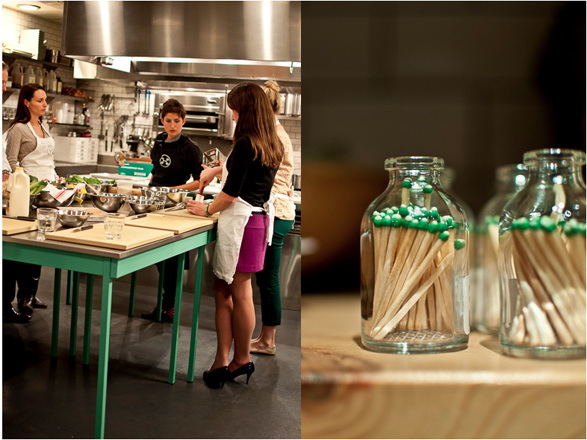 Even though it might sound easy, It takes longer to make Seas scallop poached into a lettuce leaf with creamy leeks and smoked bacon and Sea scallop roasted with a crust of parmesan cheese with baby spinach than eating it. And yet, all the eight women and the only man who were part of Constance’s class, listened very carefully to what she said and followed her instructions.

In the end it was a lovely dish, accompanied with Baguette and butter, French wine and a citron flavored creamy dessert that Constance prepared in advance.

I wish the pictures could transfer the taste but meanwhile… if you want to try it at home, contact Constance for the recipes. 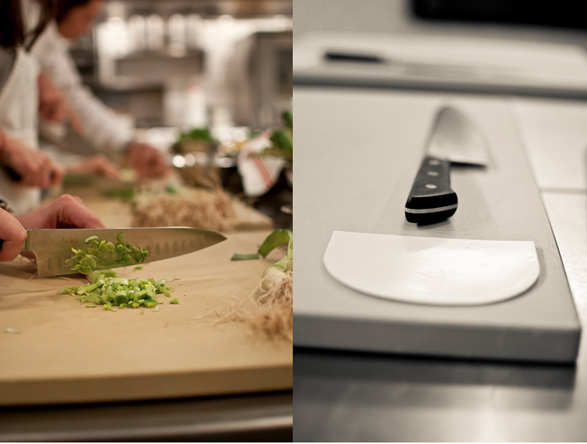 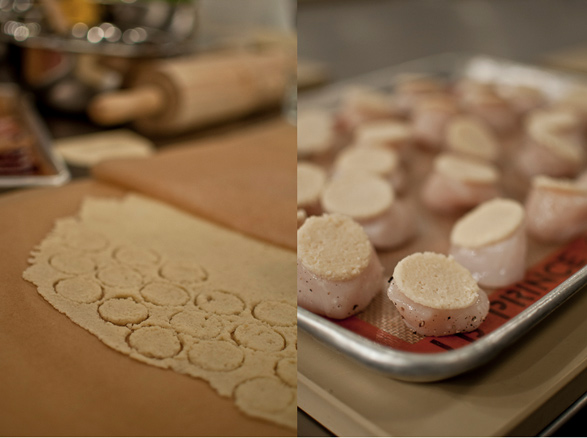 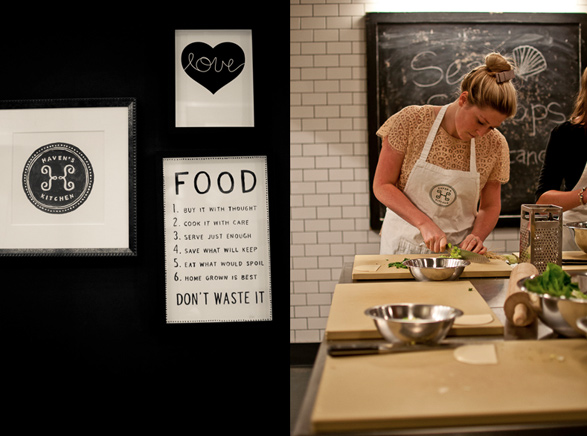 24 Hours in New York; My Favorite Spots in my City