You know it is the Holiday Season in New York by the window displays in the big department stores. A week before ThanksGiving, the windows, which were covered and under constructions, are getting revealed and unveiled with its Christmas decorations.

I must admit that from all Midtown department stores windows displays, Bergdorf Goodman is, by far, the most creative and interesting one. It has been like that for years. And yet, if there is a trend in this year holiday window displays, it has something to do with interactivity.

David Hoey, the creative guru of Bergdorf Goodman’s windows’ display was inspired this year by the Jazz Age. In an audio tour he talks about The BG Follies of 2012, and how he was inspired by entertainments such as the Ziegfeld Follies, Vaudeville revues and Busby Berkeley’s Hollywood musicals of the 1930s.

Act I: By Request

In this first window, there is a black and white homage to Marilyn Monroe in Billy Wilder’s movie Some Like It Hot. The Window is featuring a bird’s eye view of fashion from Marc Jacobs, 3.1 Phillip and Elie Saab. The bird’s eye perspective, according to Hoey, is a well known trick in the design world and in the window displays’ arene and his creative team loves to use that perspective.

The second window is a tribute to burlesque performer Sally Rand, the inventor of the risque fan dance. The main and only character in this window is covered in thousands of white feathers, used as a   mosaic and was constructed feather by feather (!!!) I can’t even imagine the patience needed for this entirely white window.

The third window showcases a collection of mid-century miniature American mannequins once used for display and merchandising, as well as for sewing practice.  It is already well known that David spends months over months, building up these collections until the time is right to use them. So this year Hoey decided it was the right time to use his miniature mannequins collection as 1920s Ziegfeld Follies girls on fifteen miniature stage reproductions made from replica 18th-Century wood moulding in A Cast of a Thousands.

The forth window (which is my favorite) is Bergdorf Goodman’s novelty act, featuring a runway look from Sarah Burton for Alexander McQueen’s Spring 2013 runway collection.  As David said, every show needs a novelty act, and Bergdorf Goodman’s highlight this year is the 24 plaster dogs performing every trick under the sun. ‘Our windows are a practice in making the impossible possible — in twisting complexities to new levels by using old-world craftsmanship and artistry’ David says.  Every surface of Act IV is covered in gold and silver leaf. I just love the red and gold combination and the dogs’ character.

The fifth window’s installation, is a giant mirrored, rotating kaleidoscope. David and his team were sketching prototypes until the team discovered that beveled mirrors moving in both clockwise and counterclockwise movement created the best result.  Approximately 1,000 individually beveled mirrors were used to create this kaleidoscope set into motion by seven separate rotating motors. The effect should be dizzying, psychedelic… an homage to Busby Berkeley’s overhead kaleidoscopic camera shot seen in Footlight Parade.  To complement the mirrored effect in this duo act are two custom-created gowns from Naeem Khan. 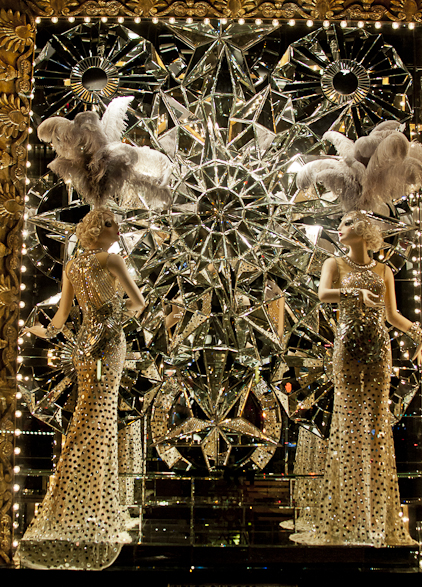 Make sure to check out the Behind the Scene of Bergdorf Goodman’s Holiday windows. You will be amazed of how many people, hours and thoughts are invested in this experience called Bergdorf Goodman Christmas Display. The crew has been working for weeks but the theme has been thought for months already.

The windows will be up till January 3, so if you are in New York, make sure to see them.

24 Hours in New York; My Favorite Spots in my City