Copenhagen on the Go; Danish Design 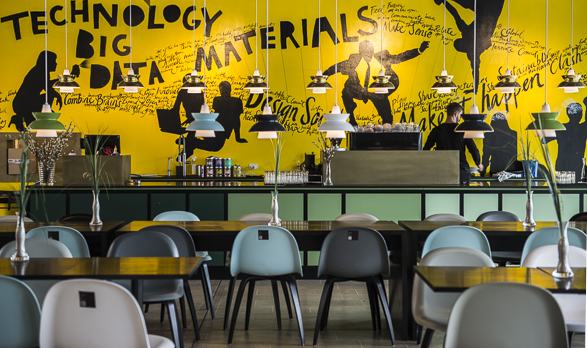 There is so much of the buzz related to Denmark and Copenhagen regarding the Modern Danish Design. Denmark has been a leading nation in the design field for decades. Whether it is a Danish furniture to Danish fashion and Danish toys, Denmark is producing World renowned design classics, which are being distributed and copied worldwide. Starting in the 1950s with design legends such as Arne Jacobsen (mostly known for the ‘Egg’ chair) and Hans Wegner (known for the ‘Shell’ chair) the Danish design tradition has developed into a strong international brand. Scandinavian, and in particular Danish design has become synonymous with timeless style and no wonder Copenhagen is filled with stores of that kind, and I will mention some of the names and addresses at the bottom of this post. Here are some of the spots we visited and these are really just the tip of the iceberg in Copenhagen.

The Danish Design Center was different than what I had expected. Somewhat I thought I would find a large space which curates, shows and promotes the Danish design; a place that will play the role of a library or informational center, maybe even a museum of the history of the Danish design. Instead, I got into a nice and colorful cafe area, Design Society Cafe, where people can sit and work on their computers while the second floor is dedicated to some professionals whose goal is to promote the design activities in the intersection of design and innovation, in order to solve architectural problems. In other words, we didn’t see any kind of ‘design’ or furniture in the DDC, but we got to enjoy a nice coffee break in a very colorful space (see image on top). 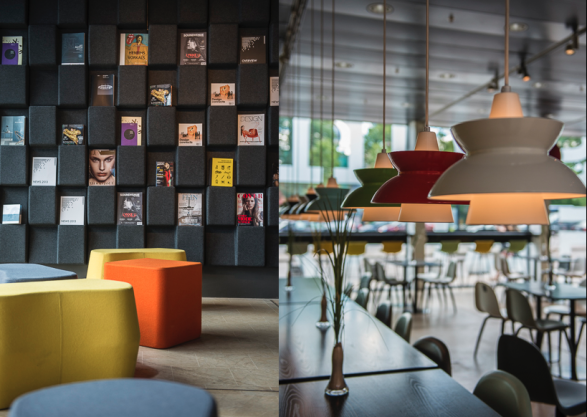 The first time I came across the colorful furniture and accessories of Hay, was actually last year during a shoot I had in Ghent (Flanders) where I ran into a beautiful concept store called Ydee, with a vibrant window-display . I had a nice conversation with the store owner who explained to me the philosophy of Hay. I could easily buy half of the store back then but I was ‘saved’ by a limitation of space in my small luggage. (I wish I could tell the store manager to pack me a table to go. You know what I mean). Since then I started to notice some mentioning of Hay on some of my colleagues blogs and I knew that once I visit Copenhagen, I definitely need to visit their store.

Hay is considered the forefront of Denmark’s design renaissance. The Hay House, is located in an elegant 1896 Art Nouveau building in Østergade 61 and it is a colorful two-floors store packed with brands such as Vitra, Alessi, Komplot and Established and Sons as well as many smaller local brands. When we got to the store, it was quite packed with other curious people like me who walked around and were happy to take pictures. 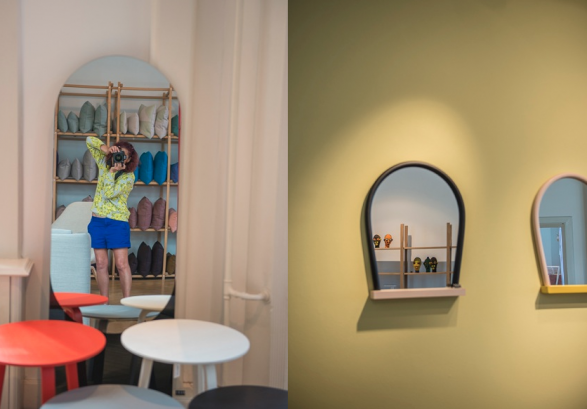 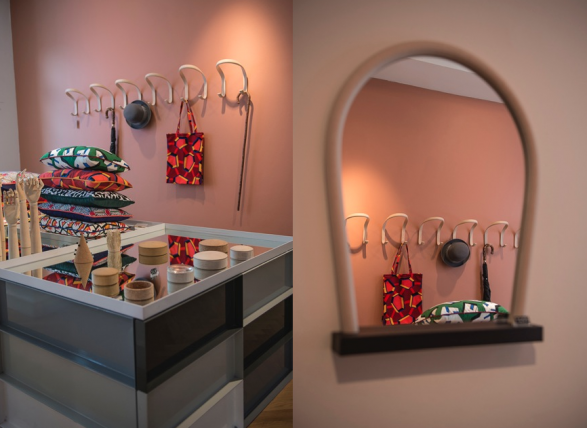 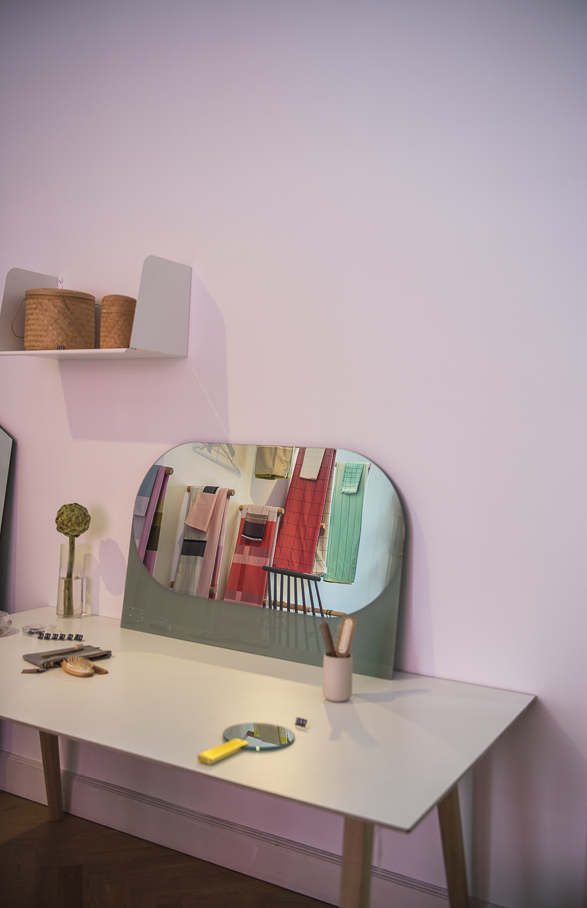 Are you in need for some fonts? Would you like to shop some? This tiny store in Værnedamsvej street is offering a very wide selection of fonts. In 2010, The Copenhagen design agency e-Types opened the world’s first physical font shop, serving as a material manifestation of the agency’s webpage. A few of my colleague bloggers recommended the place, which also sells posters, cups and T shirts, for the non graphic designers and/or the typographers among us. Those graphic designers and typographers will find a great interest on a Mac computer in the back, where they can search for fonts or buy one to take with them on a USB device. As this store is quite small, the easiest way to locate it in the city, is just across the street from Granola cafe. Check the opening hours in advance. 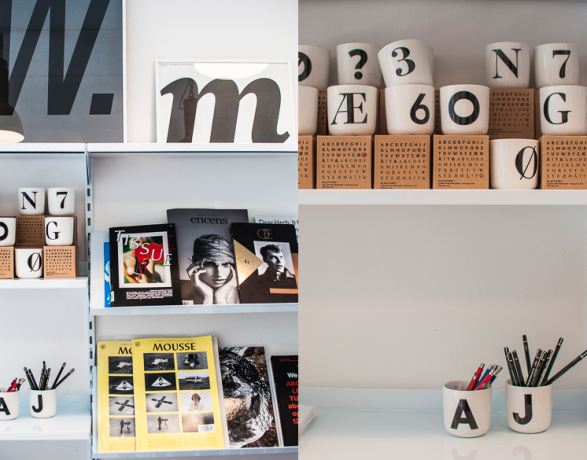 More Stores and Addresses worth checking:

Norman: Located in a former cinema, this furniture store hosts the brand’s entire range of modern designs and also stocks larger pieces by companies such as New Danish Modern, Moooi and Established and Sons.

Designer Zoo: This is one of the most interesting places in Copenhagen to visit and witness how handicraft is being made. There are eight young in house designers with whom you can communicate and ask questions about their work flow, etc. From knitting, painting, metal work, glasswork or ceramics, the results are beautiful. The store was founded by Karsten Lauritsen, a furniture designer who was looking for a space to highlight these hand crafts from across Denmark in one place.

Royal Copenhagen: In case you are looking for a blue-blooded porcelain manufacturer (owned and run by the royal family from 1775 to 1868) then the Royal Copenhagen flagship in Amagertorv 6, is the place for you. Located in one of Copenhagen’s oldest renaissance buildings (dating back to 1616) the space is an integrated museum and shop, which stocks the brand’s entire collection, including the ‘Blue Fluted’ patterns that have graced Royal Copenhagen tableware since it was founded to modern collaborations.

Retrograd: For those of you who are after the Vintage, Retrograd keeps an impressive stock of vintage furnishings and household items from the 1950 and the 1960. It stocks everything from porcelain to tableware. The store was opened in 2003 first as a small basement store that soon got bigger. The store is considered a wonderland for any design collector, interior designer or anyone who loves to collect vintage items. 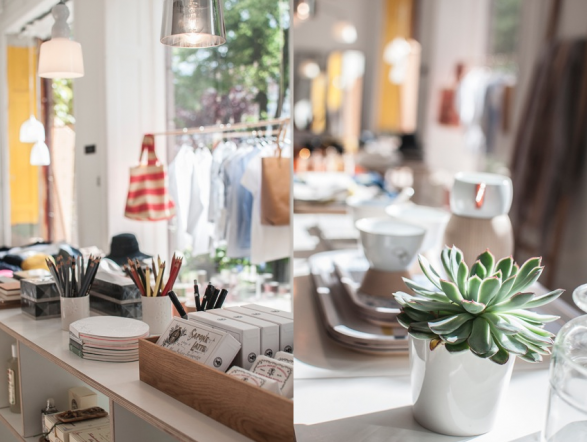 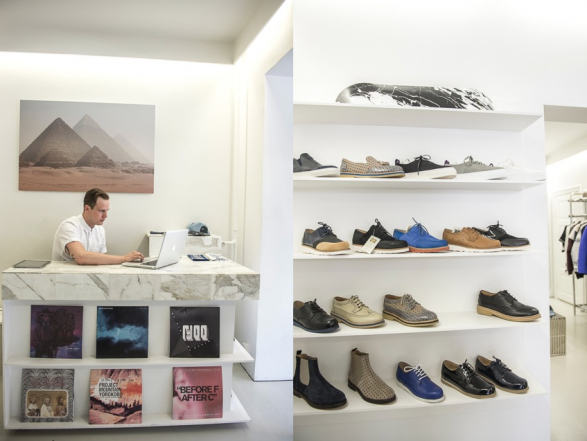